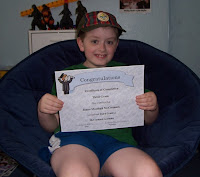 We are officially done with 3rd Grade -- Yippee, Yahoo and Woozer!

We are completely and utterly burned out and ready for the summer break. The plan is to take 6 weeks off, then start fresh as of September 1st. We'll see if either one of us lasts that long without going crazy. I just finished reviewing what James completed during the year and it always amazes how much we got accomplished.

I went into the review with the feeling that we missed something, but it doesn't look like we have. I tend to get that feeling especially with Math. We dropped all the formal mathematics this year and just concentrated on addition and subtraction using Kumon Workbooks. Half the time he uses his fingers to count. The other half the time he manages to figure it out in his head and snaps off the answer and then there are those days that he just looks at me blankly. I do believe it is time to move forward and upward. Now I have to figure out whether to go with the spiral or mastery approach and take another look at Math-u-see, Modern Curriculum Press mathematics and Saxon to see which will be the best fit. I've tried all three in the past, just need to settle with one and not give up when we hit the wall. Going to work diligently on drills and memorization.

What we accomplished this year:

Devotions and Bible study: We did a mini proverbs study, devotions about God, attitude, respect and during the middle of the year started Explorer Bible Study of Genesis. We got about half way through Genesis, then stopped to work on an obedience study. Debating on whether going to continue Explorer or move on to Greenleaf's Guide to the Old Testament. We are already very familiar with Genesis so will probably move on.

Completed the Grammar section of Voyages in English which included learning about Sentences, Nouns, Pronouns, Verbs, Adjectives, Adverbs and Conjunctions, Punctuation and Capitalization, and Diagramming. We did a couple exercises in the written and oral communcation section but James already knew how to write a personal narratives and his creative writing skills are very good. We will be casually working on how to write book reports over the break. He is going to be required to read 20 chapter books and write a synopsis on each one in order to earn Monsters Vs Aliens DVD in September. We will continue with 4th grade VIE.

Completed Spelling Workout C with flying colors. He seems to have a photographic memory and misses very few words. Will continue with SWO Level D for 4th grade. Thinking of adding Wordly Wise. I was looking at it the other day and seems it would be very beneficial.

Cursive: He finished Handwriting Without Tears 3rd and 4th grade cursive workbooks. We started the 5th grade workbook but stopped when it started getting into grammar skills, latin and other things. Will save it for later.

Writing: We started with writing strands at the beginning of the school year but it was much too simple. Switched over to Writing With Ease by Susan Wise Bauer mid year and continue with it for 4th grade. Also James has been writing lots of stories about Godzilla and putting them on his Godzilla blog.


Science: Concentrated on Chemistry this year as suggested by Well Trained Mind. James isn't big on experiments so we did more reading than anything else. Father was in charge of science and he came up with interesting exercises for he and James to do. They read DK Eyewitness Chemistry, read about different scientists such as Archimedes, Mendelev, Roger Bacon, Alan Turing and Robert Hooke. Also read living history book "Mystery of the Periodic Table", "Archimedes and the Door of Science," "Galen and The Gateway to Medicine." and "Periodic table-elements with style" Plus he's been rereading all the Magic School bus books. Will be moving on to Physics using Exploring the world of Physics and lots of hands on stuff such as the Physics workshop.

History: Been working our way through This Country of Ours by H.E. Marshall slowly but surely. We are up to chapter 25 and will be continuing for the 4th grade and finish up, including adding in geography study of the states and presidents.

We didn't do any art, music or language study this year, but will be adding it all in for 4th grade. James loves to draw so we will be doing Artistic Pursuits for grades 4 - 6, and adding in Meet the great Composers. Also Father wants James to start an instrument this next year, so we will be investing in a Yamaha keyboard. Plus (keep your fingers crossed) attempt Latina Christina. James still wants to learn Japanese. I have Before You Know It so may just set him loose with that and let him do it on his own, see what happens.

Will continue with Webelos and mix in working on the achievements with homeschool stuff. He is also interesting in learning Kung Fu so will be looking into that. Otherwise will have to figure out a physical education program since he isn't really into organize sports.