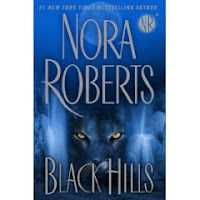 Front Flap: "A summer at his grandparents' South Dakota ranch is not eleven year old Cooper Sullivan's idea of a good time. But things are a bit more bearable now that he's discovered the neighbor girl, Lil Chance, and her homemade batting cage. Even horseback riding isn't as awful as Coop thought it would be. Each year, with Coop's annual summer visit, their friendship deepens from innocent games to stolen kisses, but there is one shared experience that will forever haunt them: the terrifying discovery of a hiker's body.

As the seasons change and the years roll by, Lil remains steadfast to her aspiration of becoming a wildlife biologist and protecting her family land, while Coop struggles with his father's demand that he attend law school and attend the family firm. Twelve years after they last walked hand in hand, fate has brought them back to the Black Hills when the people and things they hold most dear need them most.

Coop recently left his fast paced life as a investigator in New York to take care of his aging grandparents and the ranch he has come to call home. Though the memory of his touch still haunts her, Lil has let nothing stop her dream of opening the Chance Wildlife Refuge, but something...or someone...has been keeping a close watch. When small pranks and acts of destruction escalate into the heartless killing of Lil's beloved cougar, memories of an unsolved murder in these very hills have Coop springing to action to keep Lil safe.

Lil and Coop know the natural dangers that lurk in the wild landscape of the Black Hills. Now they must work together to unearth a killer of twisted and unnatural instincts who has singled them out as prey."

The book description pretty much says it all. There isn't much I can say about Nora Roberts. She is a fantastic writer and her characters spring to life on the pages. Lil and Coop have lot to work out and work past in the midst of the search for the murderer. The story includes subplots involved Lil's parents, Coop's, grandparents, Lil's pseudo adopted brother and her close friend and co-worker Tansy. Lots of mystery, mixed with romance.

Annie from Reading, Writing and Ranting:
"I loved it from start to finish - it was just what I needed. Fans of Angel's Falls and Nora Roberts's other romantic suspense novels will enjoy this read!"


Errant Dreams Reviews
"It isn’t the speed with which Nora Roberts writes and publishes books that currently amazes me, although it’s certainly impressive. It isn’t even the fact that I find her books consistently enjoyable, although that’s pretty amazing too given how many of them she puts out. It’s the fact that she can explore so many different milieus with such immersive depth that really bowls me over."
at July 31, 2009