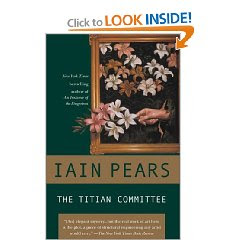 It's 9:15 here and I've managed to complete my 2nd book - The Titian Committee by Iain Pears. Total pages 230.

Description according to Amazon: "This playful satire of the squabbling international art scene and the Italian police bureaucracy reunites volcanic beauty Flavia de Stefano of the Italian National Art Theft Squad, and diffident British art dealer Jonathan Argyll, who first met in The Raphael Affair. Set in Venice and first published by Gollancz in 1991, the tale opens with the murder of American art historian Louise Masterson, a member of the scholarly international Titian Committee, who is found stabbed to death in a bed of lilies at the Giardinetti Reali. Then the elegant, reputedly incorruptible British art collector Tony Roberts drowns in a canal, and French art philosopher Georges Bralle is discovered suffocated in his home in France. Affection blooms between Flavia and Jonathan as they probe current affairs and Titian's paintings for clues to the killings and the answer to a question about the painter's life. Pears, who has a doctorate in art history from Cambridge, writes with a Beerbohm-like wit."

Interesting fictional Art History Mystery which included a lot of historical information at Titian. I enjoyed it which is a good thing because I also have Pears newest novel "Stone's Fall" to read and review before it is released in May.

"By no stretch of the imagination could he be considered handsome, even in the best of circumstances. Late forties, he had a thin face, slightly pointy nose, blotchy skin and small colourless eyes. Apart from that, there was not much to be said for him. If one of the fishermen in the lagoon accidentally dredged up a large herring, dressed it in a crumpled grey suit and arranged it in a chair with a pair of wire-rimmed spectacles over its nose, the resemblance would have been extraordinary." pg 17

I have managed to read a sum total of 618 pages so far and I really couldn't tell you how many hours. My time keeps getting interrupted. I am going to attempt next to read "Iron Kissed (Mercy Thompson Book # 3) " by Patricia Briggs which is 287 pages. I am taking a break to read James a story before he goes to bed. I am going to try and at least stay up til 2:00 a.m reading. However, my night owl husband, whose not used to me be up so late, seems to be getting ideas. :)

Check out how everyone else is doing here