The Liberty Belle B-17 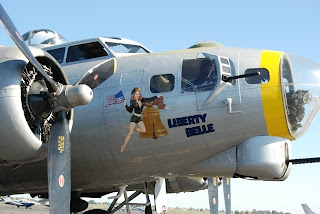 The Liberty Belle B-17


Sunday morning we are at home and heard the rumbling of an airplane. Father knew instantly it was a old military plane and heads out onto the patio. The Liberty Belle flew overhead and he got quite excited about seeing the B-17. That afternoon He and James went over to Mather Field near our house to see the plane.


What is the story behind the Liberty Belle?

On September 9, 1944 the 390th Bomb Group attacked a target in Dusseldorf, Germany and suffered its second largest single mission loss of the war. Over the target just prior to bomb release, one of the low squadron B-17s was hit in the Bomb bay by flak. The 1000 lb. bombs exploded and nine of the twelve aircraft in the squadron were instantly destroyed or knocked out of formation.

Six of the nine went down over the target, one flew two hours on a single engine and landed at Paris, another "crippled plane" landed in Belgium and the other struggled back to its home base and landed long after the other thirty nine B-17s had returned from the mission. The one that came home was "Liberty Belle", she went on to complete 64 combat missions before being salvaged on February 18, 1945.

James and Father had a grand time climbing around the old plane and of course Father, ever the engineer took many many pictures of the electronics of the plane. These types of things really fascinate him.

James was more fascinated with the rest of the airplane 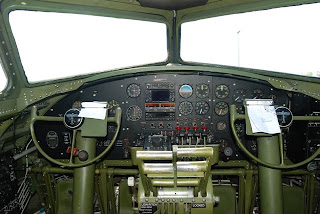 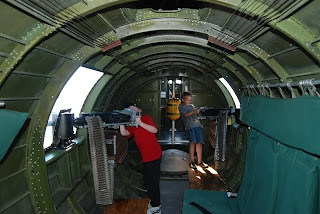 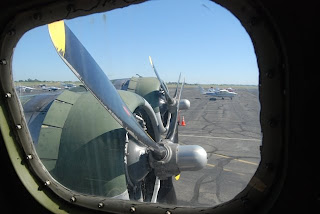 The view out the window of the propellors