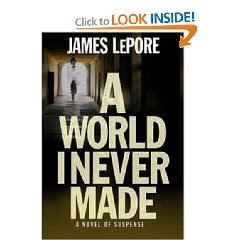 A World I Never Made


Front Cover Flap: "Pat Nolan, an American Man, is summoned to Paris to claim the body of his estranged daughter Megan, who has committed suicide. The body, however, is not Megan's and it becomes instantly clear to Pat that Megan staged this, that she is in serious trouble, and that she is calling to him for help.

This sends Pat on an Odyssey that stretches across France and into the Czech Republic and that makes him the target of both the French police and a band of international terrorists. Joining Pat on his search is Catherine Laurence, a beautiful but tormented Paris detective who sees in Pat something she never thought she'd find--genuine passion and desperate need. As they look for Megan, they come closer to each other's souls and discover love when both had long given up on it.

Juxtaposed against this story is Megan's story. A freelance journalist, Megan is in Morocco to do research when she meets Abdel Lahani, a Saudi businessman. They begin a torrid affair, a game Megan has played often and well in her adult life. But what she discovers about Lahani puts her in the center of a different kind of game, one with rules she can barely comprehend. Because of her relationship with Lahani, Megan has made some considerable enemies. And she has put the lives of many--maybe millions--at risk."

"A World I Never Made" is a debut novel written by new author James LePore. The story begins with a letter - a suicide note from Megan to her father which I had previously mentioned in a Tuesday Teaser. Pat and his daughter have never been really close, but he is surprised by her note. As soon as he realizes the dead woman is not his daughter, he begins to search for her not realizing that other parties interested in his daughter also are searching for her. Pat comes upon the young flower girl who Megan mentioned in her note and she tells Pat his daughter needs him and he will find her. The girl keeps popping up throughout the story, which is a another mystery in itself.

What is interesting about the story is while we follow Pat during the year 2004, meghan's part of the story begins in 2003 until at some point they begin to merge. "A World I Never Made" is very suspense filled, action packed and the body count starts to add up as Pat tries to stay ahead of everyone else looking for his daughter.

I received "A World I Never Made" courtesy of Julie at FSB Associates and thoroughly enjoyed the story and hope to see more from James LePore. Thank you Julie for sending me the book.


Other thoughts about the book

Elizabeth at As Usual, I need more Bookshelves
"A World I Never Made is a highly entertaining novel - a great debut. I will certainly read LePore's next work - I can only hope it will be this much fun!"


Cheryl at Cheryl's Book Nook
"Nothing could have tore my attention away from this story. The World I Never Made by James LePore is a must read for thriller fans!"

James at Rough Edges
"I wasn’t sure what to expect when I started reading this book, since it’s a first novel from a publisher I wasn’t familiar with, but what I got was a well-written thriller with a likable hero and interesting characters."