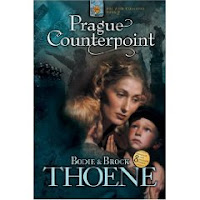 "He had lived for thirty-four years and had never noticed how many shades of color streaked the early morning sky. But this would be his last sunrise, and the horizon seemed incredibly detailed and bright.

Walter Kronenberger stood at the window of the shabby hotel room and watched the colors change in the eastern sky. Deep purple blended into a thousand hues of blue and crimson and a lighter shade of pink where the sun would soon appear.

Below him German tanks, emblazoned with the emblem of Hitler's Reich, rumbled past on the streets of Vienna. Walter did not look at them. He had seen them before. He had left Germany because of such sights and sounds. Like every fool in Austria, he had stayed because he thought the tanks could never come here."

Check out other weekly geek's quote of the day themes here.
at March 09, 2009