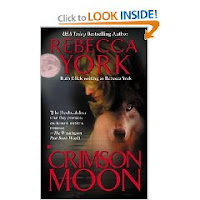 
Back Cover:Johnny Marshall spent his life looking for trouble...until a bar brawl left him half dead. Needing a fresh start, the young werewolf headed west and changed his identity. As Sam Morgan, he now dedicates his life to protecting the environment and steals from those that abuse the land. His latest target is a lumber baron. But before Same has a chance to implement his plan, he encounters the most beautiful woman he's ever seen. The problem: She's the lumber baron's daughter... Olivia Woodlock is a woman of many secrets--and she isn't about to surrender them to anyone. Especially not Sam Morgan--an enigmatic stranger who is obviously harboring a few secrets of his own. But she can't resist the heat smoldering between them--or Sam's offer for help. Because Olivia is in danger, and if she doesn't stop the man intent on dominating her--and destroying anyone who stands in his way--she and Sam will have no chance to explore the passion that promises to bind them together for eternity...

You can't expect every book in a series to be good. Some are, some aren't. I didn't like Crimson Moon as well as the first book in the series Killing Moon. The characters felt sort of flat to me and I just couldn't get into the story. I ended up skimming much of the story just because I wanted to find out what happened. The premise was interesting. The bad boy were-wolf Johnny Marshall, after being beaten and left for dead, leaves everything behind to make a new life for himself. As a master thief. Olivia and her brother, knowing Sam's disdain for their father set him up and let him break into their house to rob them so they can catch him. They need his help recovering something very important to their family and their psychic health from a family friend turned evil enemy who wants Olivia all to himself and to destroy her family. It is a paranormal mystery and if you enjoyed the other stories in the series, then you may enjoy this one as well.

I still want to read the other two books in the series Edge of the Moon and Witching Moon.