Book Review # 20 - Dance with the Dragon 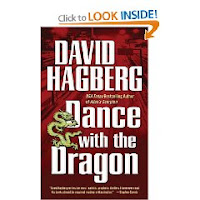 Dance with the Dragon


Back Cover: "The CIA is one edge. All signs indicate that something is coming at the United States: Perhaps another 9/11, maybe bigger. The body of a CIA agent is dumped on the steps of the U.S. Embassy in Mexico. His last operation was to tap into the communications of the Chinese embassy, but there is no record of why. The agency again turns to Kirk McGarvey--an old warhorse trying to retire--to figure out the connection between China and the murdered agent. His only informant is a darkly sensous Iranian belly dancer. Though her story changes with the wind, her shattered mind holds the old clues to the terrifying truth behind the agent's death.

Dance with the Dragon is intense, convuluted, and wordy trip into the world of the CIA. In trying to solve the mystery of the death of Louis Updegraf, connections between China and Mexico are discovered. Are the Iranians involved as well? Are they planning something against the United States. Are weapons or drugs involved or is all of this just the personal vendetta of a rouge agent? Dead bodies pile up as Kirk investigates and tries to find out the truth.

This is a first time read of author David Hagberg. There are many characters, substories and backstories throughout the story with many complexities and sometimes it gets confusing and drags. Halfway through the story I was contemplating quiting, but kept on reading in order to find out what happened. I was disappointed with the conclusion of the story.