We had a very busy week with lessons, cub scouts, father's projects and just life in general.

Devotions: Wrote and memorized Proverbs 15:1 A gentle answer turns away wrath, but a harsh word stirs up anger. Next week we start Explorers Bible Study - Genesis.

Voyages in English: Continued Unit 4: Verbs with Lessons 4.5 Regular and Irregular verbs, 4.6 Bring, Buy, Come and Sit and 4.7 Eat Go and See. Father and James completed the worksheets on their days to see how much James retained of the lesson. James did excellent, but Father flunked. Had to give him a refresher course on past and present participles. :)

Science: Father and James continuing with Chemistry: read and discussed "Looking at Air" in DK Eyewitness Chemistry book; covered Chapter 2 The Alkaline Earth Metals in Periodic Table; read Chapter 6 Archimedes and Astronomy and all about Roger Bacon in Great Scientists.

Working with James on earning his Bobcat Badge. He has to finish eight things, then he'll start working on earning badges in the Bear Trail. The den mother said we could apply things we've completed in homeschooling toward the badges. The kids in his den will be moving up to Webelos in May, so we are going to work with James to get all the achievements done so he can move up with his den.

1) The Cub scout promise: We all practiced the cub scout motto and memorized it. By Thursday we all had it down pat.

We are discussing and working on the rest.

2) The law of the pack
3) The meaning of the Webelos
4) The Cub Scout Sign
5) Handshake -
6) Motto
7) Salute
8) Exercises in How to Protect Your Children from Child Abuse. I'm still reading the pamphlet and figuring out how we are going to talk about this to James. We discussed stranger safety in the past, but not gone into detail regarding child and sexual abuse. Never had to before and the subject material makes both Father and I uncomfortable. The material is presented in a way that gets you thinking and gives scenarios to discuss with your child. James is at that age he no longer wants to go with me into the ladies room when we are out and about. I have difficulties even considering letting him go into the men's bathroom alone. It is a shame that is the case these days, but because it is, he needs to know how to protect himself. We will be discussing this weekend.

In addition to regular lessons, James and Father worked on his derby car for the Pinewood Derby.

First it had to be cut into shape, sanded, buffed and everything that goes along with that, then painted and the finishing touches put on. Father and James worked hard.


The Pinewood Derby was last night and as a result of their hard work, James won Best Shape at the Derby. 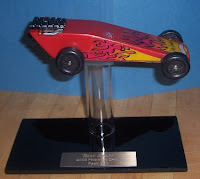 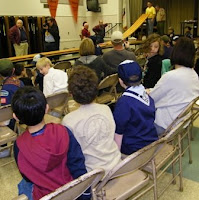 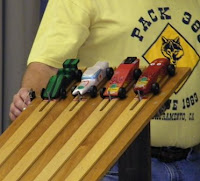 He made it to the finals as well. His car was one of the nine cars that made it and he was the only Bear Cub in the finals. His car was eliminated in the second round, coming up 8th in the race. I'm very proud of him.