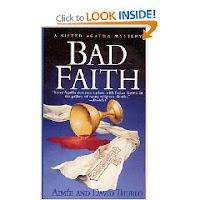 
Back cover: "Once she was Professor Mary Naughton, investigative reporter, and free spirit. Now she is Sister Agatha of Our Lady of Hope, a cloistered, financially struggling monastery in New Mexico. As an extern--a nun who handles her order's dealings with the outside world -- she is used to having her faith and newly acquired patience tested. But when popular chaplain Father Anselm is poisoned to death in the middle of Mass, Sister Agatha has to bring all her worldly skepticism and savvy instincts to bear to uncover the truth before scandal and unjust suspicion destroy Our Lady of Hope's future. She's up against a hostile local sheriff, an ex-lover who's never forgiven her for 'abandoning' their life together. She's got no shortage of suspects-with-secrets outside, and inside, the monastery. And she'll have to race the clock to stop one remorseless murderer before there's more hell to pay...."

I'm in trouble because found another new to me author duo and I thoroughly enjoyed the first book I read - "Bad Faith." It is the first in the Sister Agatha Mystery series. I also have the 2nd book "Thief in Retreat" which will be reading soon for Winter Reading Challenge. They also have another mystery series about a female Navajo FBI agent called "Ella Clah" which looks interesting.

Bad Faith is a very interesting read because it is not only about a murder mystery but what day to day life is like in a cloistered convent. I visited a cloistered convent once back when I was a teenager and it was very interesting, quite enlightening. They had many rules to protect the sisters including a dress code for visitors, but that is another story in itself.

Sister Agatha is one of two externs for the convent, which means she is the intermediary for the convent, handling all the outside business for the convent and making sure that nothing disturbs the sisters. When Father Anselmo dies from poison, she does everything she can to help solve the murder, while protecting the sanctity of the convent. In the course of her sleuthing to help solve the murder, she not only has to work with the sheriff, who just happens to be an ex-lover during her wild days, and who couldn't or wouldn't understand why she chose to become a nun.

She manages to uncover one mystery after another - all leading up to discovering who poisoned the priest and why. Was he the intended vicitim all along or was it someone else? What secret is one of the postulant's harboring and will it affect her decision to become a nun. Why do all the computers keep breaking down? Is it bad luck or is someone sabatoging them?