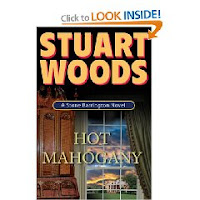 Front Flap: "Stone Barrington is lured from Elaine's to New England, and the genteel but cut-throat world of priceless antiques, historic homes and lavish country estates. In a place dominated by bluebloods and their inherited wealth, along with the nouveau riche, there are surprisingly few rules of engagement, and Stone finds himself navigating a dangerous course, one where even the most expensive and sought-after status symbols are sometimes stolen and sometimes clever fakes, though no less pricess."

In Hot Mahogany, Lance Barton's brother barton, whom Stone didn't even know existed, appears and Lance asks Stone to help him. He suffered a blow to his head and can't remember where he lives or how he got there. That is just the beginning of many twists, turns and messes Stone gets himself into in this story. You have the usual cast of characters from Elaine to Dino to Holly assisting Stone as he trys to get to the bottom of who stole Barton's antique mahogany secretary to dodging his latest paramour's jealous boyfriend. Hot Mahogany is a quick, easy fun reading and entertaining.
at January 24, 2009