What a week. Even though we are officially on a Christmas vacation from formal lessons, the week has been full of informal and life lessons.

I worked at the shop on Monday, Wednesday and Friday until 5:00, then came home to fix my guys dinner. My techs agreed to cover until 7:30 on those days and handle the shop on Tuesday and Thursday. The three of us will rotate working on Saturdays for the time being. We were all a little fried yesterday, especially with it being a full moon day. Lord have mercy when the moon is full - we gets the strangest calls. I had some folks call and come in who were just out there. 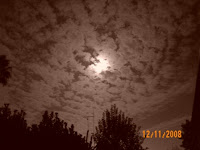 The full moon was absolutely beautiful and I had a hard time taking a shot that would do it justice. I fiddled with all the different settings on my camera and came up with a few that I liked. We have been enjoying walking the court at night and looking at the Christmas lights. The full moon was an added bonus.

Father is feeling a bit better and the pain in his leg is starting to abate just a tiny bit. He has been taking vicodin and we've been trying to alternate it with advil. His regular doctor only gave him a prescription for 30 pills which lasted him one week. We pulled teeth to get a refill. He's been able to go a bit longer between dosages, however is still in a lot of pain. He does have a low threshold for pain so talked to the podiatrist yesterday. They are going to give him one more refill of vicodin and prescription strength ibuprofen. They want him to take one vicodin, then three hours later 600 mg of ibuprofen and just keep alternating every three hours. That way it keeps pain medication in his system without any rebound effects.

James tried taking advantage of the whole situation with Father being laid up and me going into work on Monday. I had stayed home quite a bit the week before and only went into the shop for a couple hours to take care of payroll and other paperwork. So what does he do the first time I'm gone for several hours?

He went out in the front and wondered around the court, chatting with different neighbors for a good hour. He walked down to R's and talked to him while he worked on more christmas decorations. Our grandmotherly neighbor saw him and sent him home. She came by to talk to Father to let him know James had been wondering about. The rules are he is never to go out in the front, beyond our patio gate without our permission nor alone. Despite the fact that he is nine, I don't like him being in front by himself. When I was eight, there was no problem with me walking alone to school up a busy street. It was safe. Now, you can't even let your kids play in your front yard alone.

James was sent to his room for the rest of the night by Father with the threat I would spank his butt good when I got home. When I came home, we had a long conversation about responsibility, trust and consequences. (and no I didn't spank him - the threat was good enough) We went over the scenario of him being outside and Father being stuck inside, not being able to help himself. What would have happened if he had fallen while James was outside. Who would have helped him? Yes, I guilt tripped the kid big time, but we had discussed him being responsible and 'the man in charge' while I am at work. I need him to be there to help get Father a drink or his glasses, keep him company, while I take care of the shop for a few hours. He was allowed out for dinner, but sent right back to his room for the rest of the evening. Being 'confined to quarters' , as James put it (courtesy of Chicken Run) seemed to be quite effective. I rarely ground the kid and send him to his room for long periods of time. He didn't like it very much. What he hated more was me taking away his computer time for the rest of the week.

Other than that one day, he's been pretty good and helping Father without complaint. He's been making his own lunch, feeding the cats and just basically being helpful. He and Father have been reading together and just spending alot of time together.

James and I are going to have the pleasure of going out and picking up a Christmas Tree today, preferably a small one. Then, we will be decorating it and the rest of the house. Time to get into the Christmas mood, put on some music and boogie.

Jesus is the reason for the season!