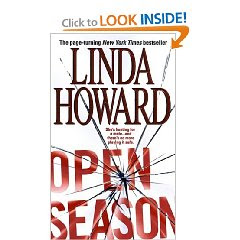 Linda Howard has become one of my favorite writers. Her novels are all unique and Open Season certainly is. Daisy Minor, the main female character had me giggling throughout most of the book. When I first read the back cover, I wasn't sure what to expect from this story.

Back Cover: "Be careful what you wish for.... On her thirty-fourth birthday, Daisy Minor decides to make over her entire life. The small town librarian has had it with her boring clothes, her ordinary looks, and nearly a decade without so much as a date. It's time to get a life---and a sex life. The perennial good girl, transforms herself into a party girl extraordinaire---dancing the night away at clubs, laughing and flirting with abandon--and she's declared open season for manhunting. But her free spirited fun turns to shattering danger when she witnesses something she shouldn't--and becomes the target of a killer. Now, before she can meet the one one who can share her life, first she may need him to save it."

Don't let the description fool you. Daisy doesn't go crazy and slutty, not at all. She is the stereotypical straight laced small town librarian with the white shirt, straight black skirts, no make up, straight drab hair and lives with her mother and aunt. She wakes up on her 34th birthday and decides her hair is drab, her clothes are drab and her life is drab. She also doesn't want to end up living the rest of her life alone. She decides the fastest way is a make over into a "party girl" Her mother and aunt are enthusiastic about her making changes and support her not only getting a make over, but moving out on her own.

Meanwhile, the bad guys are in town and frequenting the local bars. Enter Jack Russo, the new Chief of Police. Since no one in town knows him really well, he goes undercover in the Buffalo club to see if he can catch the bad guy who's been lacing drinks with date rape drugs.

Prior to Daisy's make over, He and Daisy seem to constantly butt heads every time they meet. Their encounters are humorous. When Daisy gets her make over and proceeds to go out on the town, Jack decides to stick close thinking she is too naive and needs protection. Daisy innocently manages to start a bar fight every time she goes into the bar and Jack is there to get her out of trouble.

Daisy doesn't want him saving her and wants him to get out of her way, so she can find a man. Jack decides he wants to be that man. The repartee between Jack and Daisy is hilarious and leaves you laughing. Mixed in with the humor is the element of danger involving murder and an illegal sex trade operation involving teenage mexican and russian girls, and undercover cops.

Open season was an entertaining, enjoyable read and highly recommended.
at December 26, 2008