Book Review - Now You See Her 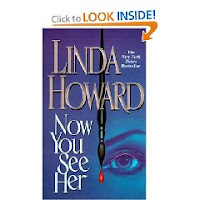 Now You See Her

Back Cover: A talented painter in her early thirties, Paris Sweeney has achieved enviable success: her work sells at an exclusive New York City gallery, and her popularity is at an all-time high. Life is good, and Sweeney, as she prefers to be called is content. But lately, Sweeney's dreams--lush, vivid, and drenched in vibrant hues--seem to echo a growing restlessness that has taken hold of her. Suddenly, impulsively, Sweeney falls into a night of intense passion with millionaire Richard Worth. Now, the true dangers of her all-consuming urgers are about to be revealed where Sweeney least expects it: in her paintings. After a creative frenzy she can barely recall, Sweeney discovers she has rendered a disturbing image--a graphic murder scene. Against her better instincts, she returns to the canvas time and again, filling out each chilling detail piece by piece. But when a shattering, real-life murder mirrors her creation, Sweeney falls under suspicion. With every stroke of her brush, she risks incriminating herself with her inexplicable knowledge of a deadly crime. And every desire--including her hunger for Richard--is loaded with uncertainty as Sweeney races to unmask a killer.

"Now you see her" is excellent. The story follows Sweeney, plus several other characters that intersect in her life. Sweeney is a loner and doesn't like to be around people or crowds. She likes to paint, but her paintings have turned darker in the past year. Just about the same time she started seeing dead people. Sweeney moved to New York because people in her small town thought she was going nuts. So, did she. But in New York, she could ignore the dead people and go on with her life. One added benefit of the strangness in her life is all streets lights turn green when she approaches and knowing all the answers to jeopardy before they are announced.

One night while deep asleep, she sleep walks and paints a vivid picture of a murder the night before it happens. She awakes with a bone deep chill that won't go away except in the arms of Richard Worth, the new man in her life. He just happens to be the soon to be ex-husband of the gallery owner who shows her work exclusively. Sweeney refuses to have a sexual relationship with him until the divorce is final. Meanwhile, his soon to be ex wife is sleeping all over the place with other men in order to manipulate them and get what she wants out of life. The primary reason for the divorce. Richard accepts the weird psychic phenonena happening in Sweeney's life and attempts to help her.

She sleep paints another painting but it is unfinished, showing just a woman's pair of shoes lying on the floor with a man's foot next to them. Each night more and more of the painting is completed and each time Sweeney nearly goes into shock from the cold. Richard is the only one who can warm her up. They try to figure out who the victim is going to be, before she is murdered.

There are several interesting twists and turns and the story is full of suspense. I thoroughly enjoyed it and once started, couldn't put it down. It's one of those that will keep you up late into the night. Highly recommended.
at December 07, 2008