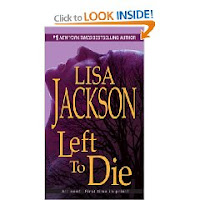 Absolutely awesome book which I could not put down. Left to die is a psychological suspense thriller that keeps you guessing throughout the whole story. At first your thinking he did it, then oh, well maybe he did it and then, hmm!

Back cover: One by one, the victims are carefully captured, toyed with, then subjected to a slow and agonizing death. Piece by piece, his exquisite plan takes shape. The police can't yet see the beauty in his work, but soon, very soon, they will... In the lonely woods around Grizzly Falls, Montana, four bodies have been discovered. Detectives Selena Alvarez and Regan Pescoli have been hoping for a career-making case, but this is a nightmare. Even with the FBI involved, Selana and Regan have nothing to go on but a killer's cryptic notes, and the unsettling knowledge that there is much worse to come... When Jillian Rivers opens her eyes, she's trapped in a mangled car. Then a stranger, claiming to be a trail guide named Zane MacGregor, pries her free. Though she's grateful, something about him sets Jillian on edge. And if she knew what lay out there in the woods of Montanta, she'd be truly terrified. Because someone is waiting...watching...poised to strike and make Jillian the next victim...

This is a first time I have ever read anything by Lisa Jackson and thoroughly enjoyed the story and her writing style. The characters are three dimensional and you get pulled not only into the story, but their lives as well. Left to Die is written in third person perspective for everyone except the killer. His portions are written in first person and makes it quite chilling as he discusses what he is going to do and who he is going after next. Well done without being too terribly graphic.

The killer somehow lures them to the mountains of Montana, shoots out their car tires causing them to crash. He rescues them and nurses them back to health only to kill them by leading them naked through the snow, tying them to a tree and leaving them to die from exposure to the elements. He leaves a cryptic calling card on the tree, carving out the woman's initials and a star positioned differently each time. The two female detectives work endlessly to try and find the killer before he strikes again.

Excellent story, but ends in a cliffhanger. You can imagine how surprising it is to be so involved in a story and then discover it's to be continued later. The rest of the story will be told in 'Chosen to Die' which won't be released until August 2009.

Highly recommended and will probably end up reading it again prior to starting the sequel.
at December 06, 2008