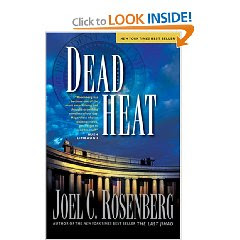 Spoiler Alert: If you don't want to know what happens, don't read any further.

Dead Heat is the 5th book in Rosenberg's Christian Political Series. The series begins with the The Last Jihad and continues through The Last Days, The Ezekiel Option, The Copper Scroll and ends with the Final Heat.

Back Flap: "The stage is set for war. Oil Prices are surging to record highs; a new dictator is rising in Iraq; China is threatening Taiwan; North Korean forces are ready to strike south; and Israel is feverishly trying to complete the Third Temple.

And in the midst of a world ready to explode, American president James MacPherson's second term is ending. The battle to succeed him is heating up into the most fiercely contested presidential election in American history. Who will lead a bitterly divided country over the next four years? And what role--if any--does the U.S. play in history's last days? As the presidential campaign narrows into a dead heat, the Secret Service learns of a catastrophic terrorist plot to assassinate one of the candidates--but which one? Who do they want dead? And can U.S. forces stop the terrorists before millions lose their lives."

The white house, the supreme court and all white house agencies have been wiped out. Only the democratic congressman who had been traveling outside of Washington D.C. survived.

New york is hit by a nuclear bomb that detonates in times square. Every thing is destroyed from the theatre district, the financial district and beyond. The united nations building along with the security council and the general assembly are dead.

Seattle, Washington is hit in Pike Place Market vaporizing everything from the Space Needle to Amazon.com main office to Safeco Field.

The vice president is whisked away to safety and quickly sworn in a President. He has to deal with picking up the pieces and rebuilding the government, while trying to determine who is responsible for attacking the United States and stopping them from further attacks.

Great book about the end of days with many surprises. You never know who is going to die next or just simply disappear.

Highly recommended but suggest you start with the Last Jihad.
at November 15, 2008