Weekly Wrap Up
Lessons didn't go exactly as planned this week, but we ended up getting alot done anyhow. Father was totally exhausted when he got back from the AES show, which meant he didn't go to work on Monday and I ended up going to work Tuesday and Wednesday.

Devotions: Read about Esther and God's Purpose. When we were reading the story of Esther, James recognized it from his Veggie Tales dvd: Esther, the girl who became queen. Very good story and of course, we had to watch it. We also started our bible study and James decided he wanted to learn Proverbs first.

Cursive: Working on Capitals and will be finished with the book next week. 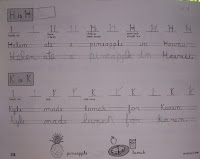 He is doing an awesome job with handwriting.
English: Completed Section 2.5 and 2.6 plus workbook about singular possessive and irregular plural nouns.

Math: Completed the Kumon Workbook of Addition. James chose to do two lessons and finish off the book. We start Subtraction next week along. Will still work on Addition with handout from various sources.

Science: Learned about Atoms and Molecules. Read chapters 9 and 10 in Mystery of the Periodic table about Mr. Cavendish and Inflammable air and Chemistry's French Revolution. 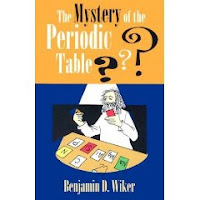 History: Read about how the flag of England was planted in the new world and about John Cabot. James did a marathon read of the last few chapters of Diego Columbus. He wanted to finish the book and I unfortunately didn't check to see how many pages it was. He read out loud for an hour!

Next week is supposed to be our off week but I thinking of changing that since James and I are driving to Arizona the week after on the 20th to see grandma and grandpa. We decided to do a road trip, instead of fly, which will be an experience for the two of us. I plan to split the drive and stop halfway, spend the night in Barstow. Perhaps hike around in the desert, see a ghost town, or visit the route 66 museum. We are going to play it by ear.
at October 10, 2008