Colidiotone at Word press
Please welcome my dad to the blog world. He is a retired colonel in the Air Force and I helped him set it up while in AZ. He will have lots to say about the presidential election, the stock market, and whatever else comes to mind. Check it out and be sure to bookmark it.

Hannity's America - A couple nights ago we caught Hannity's America. Sean Hannity expounded on the 10 reasons why Obama should not be president. The expose was very well done, interesting and educational. I hope they rerun it a few times between now and the election for more people to see.

Our wonderful county supervisors has approved this to be put in our Airport to the tune of almost $1 million dollars. 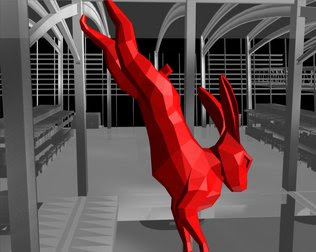 Yep, it is a 56 foot red, fiberglass rabbit that will hang from the ceiling in the center of our new airport terminal. Supposedly a certain amount of the budget has to be applied to art and for some reason they aren't or won't waive that. Seems stupid during this period of time to waste so much money on it.

Interesting bit of news: A federal judge ruled a 6th grader can wear a pro-life shirt to school.

There's only 3 days left until National Novel Writing Month begins....I'm working on a broad outline and have made a list of major and minor characters. The villain's name keeps changing for some reason. I can't decide whether want him to be Italian or not. Would that be too cliche?
at October 29, 2008