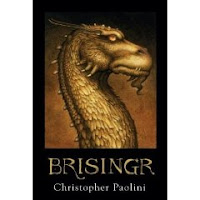 I brought Brisinger with me on our vacation to Arizona. It is 748 pages long and is the 3rd in Paolini's Inheritance series. And surprise, surprise - it isn't the conclusion, there's a book four that will being coming out at some point. My folks generally went to bed around 9:30 which gave me the opportunity to read in the evenings. I started it on Monday when we reached the hotel and finished it Friday night. Excellent story continuing Eragon's saga

Book Description: "It's been only months since Eragon first uttered 'brisinger,' an ancient language term for fire. Since then, he's not only learned to create magic with words--he's been challenged to his very core. Following the colossal battle against the Empire's warriors on the Burning Plains, Eragon and his dragon, Saphira, have narrowly escaped with their lives. Still, there is more adventure at hand for the Rider and his dragon, as Eragon finds himself bound by a tangle of promises he may not be able to keep.

First is Eragon's oath to his cousin, Roran: to help rescue Roran's beloved from King Galbatorix's clutches. But Eragon owes his loyalty to others too. The Varden are in desparate need of his talents and strength--as are the elves and dwarves. When unrest claims the rebels and danger strikes from every corner, Eragon must make choices--choices that will take him across the Empire and beyond, choices that may lead to unimagined sacrifice.

Eragon is the greatest hope to rid the land of tryanny. Can this once simple farm boy unite the rebel forces and defeat the king?"

Order of the inheritance series: Eragon, Eldest, then Brisinger

Very well done and highly recommend reading it. The story does contain many graphic battle scenes.

And I'm finally caught up with my book reviews. Since I committed to MizB's 2009 Read and Review Challenge, I probably should write a review immediately upon finishing one book and not start another until I do. It would be great practice and would be easier. Especially since Nanowrimo starts in 5 days! Will I actually have the time to read during the month of November? Who knows - we'll see.