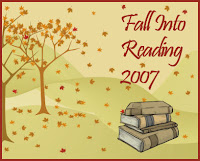 The fall into reading challenge is progressing and a little more than 1/3 over. Have finished half of the books planned and have been making adjustments along the way, adding and deleting books. I did read the whole Twilight Trilogy based on other challengers reviews and suggestions but decided not to do reviews on them.

I recently started reading Terry Brooks Genesis of Shannara: The Elves of Cintra and discovered that just couldn't get into it; too dark and bleak and depressing. So, setting it aside and will read it another time. (Maybe) Also going to set aside Bodie Thoene's A River Runs Free and the non fiction book The Other Parent.

Found 3 interesting books at Berean's and decided to add them to the challenge. I seem to be veering toward and enjoying reading books by Christian authors lately.

A new one by young adult author Wayne Thomas Batson called Isle of Swords. He is the author of the The Door Within Trilogy which totally captivated me and I enjoy his writing. The description according to Christianbooks.com: "Swashbuckling drama on the high seas! When a young boy awakens on an island, alone and injured with no memory of his past, his adventure is only beginning. What will he face next? Ruthless pirates, raging battles, a rumbling volcano, and sea creature slithering in the deep! "

Stephen Lawhead's Hood, book 1 of the King Raven Trilogy looks quite interesting. Lawhead redoes the story of Robin Hood . According to Christianbooks.com: "An epic of Robin Hood, the "prince of thieves"! Lawhead spins the tale of the merry outlaw---in this telling, he's from Wales, not England's Sherwood Forest---in a far more earthy, eerie, and elemental way than ever before."


And more of a light hearted read by Cathy Marie Hake; Bittersweet which is described by Christianbooks.com as "Laney McCain believes that all of her years of pining after Galen O'Sullivan might finally pay off as he starts to notice the woman that she's become. Squatters on Galen's land divert his attention from Laney's wooing, however. Galen shows mercy to siblings Ishmael and Ivy Grubb, allowing them to stay on the land in return for help around the farm, despite their crass language and behavior and uneducated ways. The arrival of the Grubbs disrupts more than Laney's plans, throwing life as she knows it into turmoil, but allowing for Christian grace and forgiveness to enter into lives that need it the most."
I am almost finished with "What the Bleep do we Know" and will have a review done before November 1st. Also started reading "Holy Yoga" but that is one that will take some time to read and absorb. Really need to get back into doing the treadmill and Yoga, so will have to work that into my schedule.