Book One: After Dark by Haruki Murakami 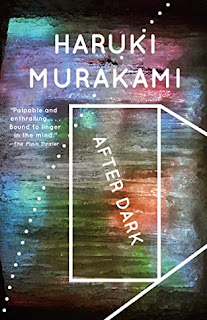 After Dark by Haruki Muraki is an intriguing story that takes place in one night between the hours of midnight and dawn.

First sentence: Eyes mark the shape of the city.

All the staples of Murakami's stories are including: the cat, the crow, the cafe, the tea, the characters awake all night, existential conversations, characters running away, the unknown, the fear of discovery. The nameless narrator - the 'we' takes the reader on a journey, through the dark hours of the night, using a wide angled camera shot which narrows down to each character and their viewpoint. A diverse cast of good and bad. One night. Unresolved stories. Or are they? Conversations through the night, afraid to sleep while another sleeps and is taken through to mystical portal. How much is a dream? How much is real?

"Nineteen-year-old Mari is waiting out the night in an anonymous Denny’s when she meets a young man who insists he knows her older sister, thus setting her on an odyssey through the sleeping city. In the space of a single night, the lives of a diverse cast of Tokyo residents—models, prostitutes, mobsters, and musicians—collide in a world suspended between fantasy and reality. Utterly enchanting and infused with surrealism, After Dark is a thrilling account of the magical hours separating midnight from dawn."

Near the end of the story I was contemplating - do any of the characters learning something, change, and grow? It's open ended, subtle. The story tickles your imagination and take you through the gamut of emotions.