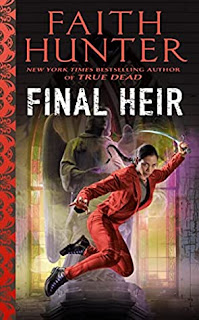 Final Heir by Faith Hunter is the 15th and final installment of the Jane Yellowrock series.  It was so, so, so good.

I did my usual read it once, fast, fast, fast on the ipad, then turned around and read it again, slow, slow, slow on paperback. It's not a story that's meant to be read fast because you'll miss a lot and it is so complex and action packed. It's the last book of the series, yet it was a great finale and answered so much. There are so many moments. Moments that made me sad, moments that were so powerful. Moments that were amusing or scary. I don't want to give too much away for those who haven't read yet, so... Jane and Beast, the I/We. Jane taking charge and also learning to let go and let others handle things. Leo and how he found a way to let Jane know what needed to be known. Angie, such a little girl but so powerful. Jane's relationship with the witches. The big bad who is trying to take over and how everyone teams up to fight him. I'm sad to see it end, but happy I can read the series over and over.

"The stakes couldn’t be higher in the newest novel in the New York Times bestselling, pulse-pounding Jane Yellowrock series.

Jane Yellowrock is the queen of the vampires, and that makes her a target as she fights to maintain control and keep peace in the city of New Orleans. She has enemies at every turn, because vampires live forever, and they keep their grudges alive with them. That includes the Heir, the vampire sire of the Pellissier bloodline, which gave rise to Leo Pellissier himself—Jane’s old boss and the former master of the city.

With the Heir and all the forces of darkness he can muster arrayed against her, Jane will need all the help she can get. She’ll find it in her city, her friends, her found family, and, of course, the Beast inside of her."

Recommend starting with book 1 - Skinwalker. You'll be glad you did.