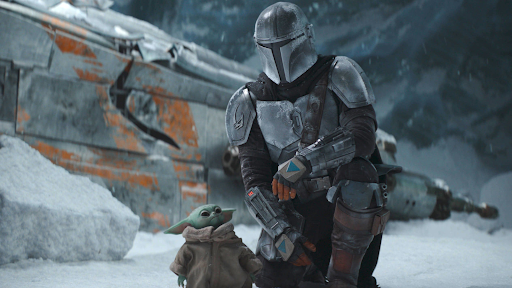 Welcome back to that galaxy far, far away, friends. After much delay, we're finally delving into season two of STAR WARS: THE MANDALORIAN, which aired all the way back in 2020 from October to December. Its high time we do that, so lets not delay any longer...

Just like the first season, Mandalorian season two consists of over eight episodes. Also, season two continues from where season one left off with Din D'Jarin's quest to protect The Child and help him find The Jedi after defeating Moff Gideon in the season one finale.

This season marks the live-action debut of characters such as Ahsoka Tano from The Clone Wars and Rebels alongside Bo-Katan as well as Cob Vanth from the Star Wars Aftermath trilogy of books.

Boba Fett finally makes his return in this, having survived the Sarlacc pit when we last saw him during the events of 1983's Return of The Jedi. He even lost his armor, which ended up in the hands of Cob Vanth himself, which he wore as a sheriff on Tatooine until Din helps him and a band of Tusken Raiders defeat a Krayt Dragon in the very first episode, the same episode in which Boba Fett shows up.

When we run into Ahsoka a couple episodes later, we also learn more about The Child, discovering that his name is Grogu and he is a Jedi youngling who survived the chaotic events of Order 66 and was hidden away for years until Din found him.

We also discover that Ahsoka is still looking for Ezra Bridger, which will become a plot point in her upcoming show, and she is seeking out Grand Admiral Thrawn, who was last seen in Star Wars Rebels being defeated in the series finale.

The finale to the show's second season gets very interesting, especially when Moff Gideon kidnaps Grogu for his own uses. Din teams up with Boba Fett, a surviving Fennic Shand, Cara Dune and Bo-Katan to find and storm Moff Gideon's Star Destroyer to rescue the young Yoda-like child. Din fights Dark Troopers (which make their canon debut) and then battles Moff Gideon, who has the Darksaber which we saw him with near the end of the season one finale.

But even after Gideon's defeat, Din and his crew still have to contend with the Dark Troopers, but help arrives in form of none other than Luke Skywalker (with Mark Hamill reprising his role). Luke cuts his way through the Dark Troopers in a sequence that made a lot of fans smile and saves Din's group, but he's here to pick up Grogu and help him get back on the Jedi path.

Din has a heartfelt goodbye with Grogu and we watch as Luke goes off with him as season two draws to an end. However, its not done yet. A post-credits scene shows Boba Fett and Fennic Shand return to Tatooine where they enter Jabba The Hutt's place and kill the still-alive Bib Fortuna, leading to Boba taking the throne to himself, setting up the events of The Book Of Boba Fett (2021).

Season two of The Mandalorian was very entertaining with some very good episodes that will never be forgotten, even Luke Skywalker's appearance was great to see and satisfying enough to those who were upset by how he was handled in the Sequel Trilogy (specifically The Last Jedi). With Grogu no longer a plot point in the show, we have to see where The Mandalorian goes from there in season three, which will be airing down the road in 2022. Pedro Pascal fills the role of The Mandalorian title character flawlessly, it is also rumored that Luke may make another appearance in season three.

My definitive final score for season two is a 9.8 out of 10, The Mandalorian's an excellent addition to the legacy of Star Wars and is worth rewatching again and again. Now, I say farewell, may the Force be with you, always.