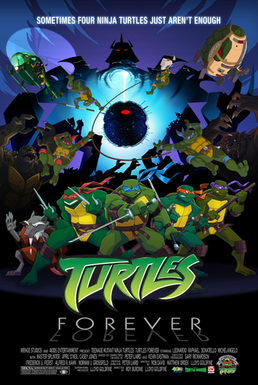 I'm back and we're reviewing a Teenage Mutant Ninja Turtles-related movie, this is TURTLES FOREVER, made back in 2009 to rejoice the TMNT franchise's 25th anniversary at the time and also created as the proper finale to the 2003 TMNT series.

The story is simple and I can give you the rundown of it.

When the Turtles of the 2003 universe come face to face with their 1980s counterparts from their universe, they team up to defeat both 1980s Shredder and the 2003 Shredder to stop them from terrorizing and destroying the TMNT multiverse. In the end, after a long struggle, the Turtles overcome the odds and defeat 2003 Shredder, saving the multiverse with help from their 1984 comic counterparts in their universe which serves as Turtle Prime.

Running at an hour and ten minutes, this film is just perfection and nothing could possibly top this one, not even the 2007 TMNT film or any of the other Teenage Mutant Ninja Turtles movies. I recently watched this after getting it a couple years back on DVD and not fully seeing it due to being distracted, I will tell you, it is really good when it is good.

I might not have seen the 1988 show or the full 2003 show, but I do love the Teenage Mutant Ninja Turtles and I've been into this franchise since I saw the first 90s movie in 2010 and what really cemented me as a TMNT guy was when I finally saw RISE OF THE TEENAGE MUTANT NINJA TURTLES, one of the latest TMNT shows to have ever come out.

Everyone put a lot of effort into making it and it shows, the voice actors had a real blast and the writers seemed to be having fun when they mixed together the serious elements of the 2003 show with the goofiness of the 1980s show. Multiverse stories can be very fun when done right, the fact they put a lot of effort into making this shows they took their time to plan this TMNT event out very well.

And so, with a smile on my face, I give Turtles Forever a 9.5 out of 10. This is a film that can't be left in the dark and ignored, so go watch it if you're able to get it and have the time to do so. With that, have a very good day out there in the real world and be safe.