James M's Review of ADVENTURES OF SONIC THE HEDGEHOG (1993) 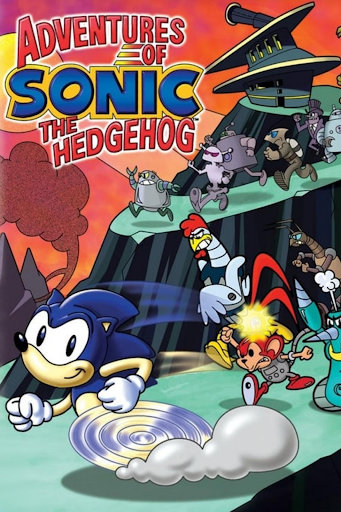 Welcome back, Sonic squad. Its time for us to review the very first Sonic the Hedgehog cartoon that ever aired, the one that was wacky and memorable next to many others. We're looking at... ADVENTURES OF SONIC THE HEDGEHOG!

The year was 1993 and it hadn't been that long since the first Sonic game had released for the SEGA Genesis with Sonic 2 releasing over a year later. Sonic was popular and merch was flying off the shelf, even a comic book by Archie was about to happen while other comics and manga were happening. And in the midst of all that, two animated shows were about to air and one of them was none other than Adventures of Sonic the Hedgehog.

Starring many talented voice actors, Adventures took place in a cartoonish take on Sonic's world and focused on Sonic and Tails as they engaged in many wacky adventures and fought the evil Doctor Robotnik and his lackeys Scratch, Grounder and Coconuts to stop the villainous scientist from taking over the planet Mobius.

Assembled by the crew at DiC Productions (now known as Wildbrain, which still owns the rights to this show) and supervised by SEGA of America, Adventures ran for a total of 65 episodes from September to December of 1993 before it was given one more episode three years later with 1996's Sonic Christmas Blast.

In the years since it aired, the show, known as AoSTH, has earned itself a memorable legacy in the fandom and spawned a couple memes such as the well-known Robotnik "Pingas" meme, which was derived from a line in the episode Boogey Mania said by the doctor himself; 'Snoo-ping as usual, I see.' Yeah, I know, its almost hilarious on so many dang levels.

I, myself, watched this show and spent two years watching the whole show from 2011 to 2013. Having seen Adventures Of Sonic The Hedgehog, I can see why so many fans love it (even though SatAM almost appears to be the most talked about Sonic show thanks to Archie). AoSTH was popular for its time and was perhaps how some fans got into Sonic in the first place.

The show has countless memorable characters adding to the universe of AoSTH, ranging from (of course) Robotnik's S6 Squad consisting of Scratch, Grounder and Coconuts, Breezie the Hedgehog, Wes Weasely and Sergeant Doberman with countless voice actors providing their best talent. Even SatAM/Archie's Sally Acorn makes an appearance in the show's final episode.

So, what are my thoughts?

AoSTH is pretty good for a Sonic show despite not being very faithful to the source material and Sonic Team's lack of involvement in it. It has so much charm, providing a fun and goofy Sonic experience that nobody, not even young kids, will ever forget. Even Robotnik himself can have his funny moments too, Long John Baldry sold it well as the doctor's voice and may he be long remembered as the man who gave the evil Doctor Eggman a voice before the games did.

Plus, as almost everyone knows, this show next to SatAM and the first two games served as the basis for Archie Sonic and the comic included many familiar faces from the cartoon such as the Super Special Sonic Search And Smash Squad and eventually included Breezie in the comic before the plug was pulled.

However, out of every AoSTH character that made it into the comic, AoSTH Robotnik's mother Mama Robotnik was left out due to very specific reasons with SEGA themselves. That's right, this show was one of the first pieces of Sonic media to give Robotnik a family and we got to see an interpretation of Eggman's mother. And boy, Mama Robotnik is quite terrifying if you let her be terrifying.

Most importantly, this show did get a game tie-in at one point in the form of Doctor Robotnik's Mean Bean Machine, a re-skin of Puyo-Puyo featuring the AoSTH version of Robotnik and some of his Badniks from the cartoon. Despite AoSTH's lasting legacy, it is almost rarely referenced by current Sonic media due to policies at SEGA, but it was referenced in 2021's Sonic Encyclospeedia.

My score for this show, which was so good to see, gets a fine 8.5/10 for cartoon-y cheese and hilarity. Now, I will see you later for another review...