James M's review of Doctor Who: Revolution Of The Daleks (2021) 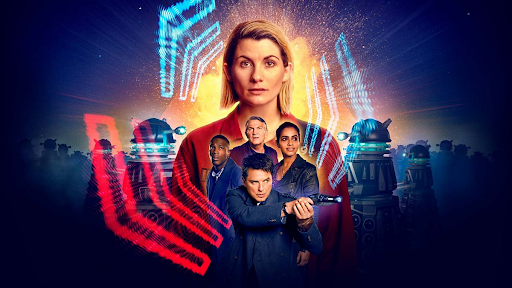 Welcome back, Doctor Who fans, its time for another review...

After the universe-shattering revelations and events of "THE TIMELESS CHILDREN" at the end of 2020's Season 12 of New Who, there was the question of what awaited in the next episode of the sci-fi phenomenon. After months of waiting, we got our answer in the New Year's 2021 special known as REVOLUTION OF THE DALEKS.

That's right, the Daleks were back and this episode seemed to follow up from 2019's Resolution which dealt with a Recon Scout Dalek. So, what's the story with this one?

Well, the episode takes place ten months (from the perspective of The Doctor's friends Ryan, Graham and Yaz) after the events of THE TIMELESS CHILDREN and the trio discover that businessman Jack Robertson, whom they met in the series 11 episode ARACHNIDS IN THE UK, is working with the Daleks after seeing footage of a Dalek drone in action.

The companions try to confront Robertson about the Dalek, but the are dismissed. Not long after, Robertson meets with his scientist Leo, who informs him that he discovered traces of organic cells inside the "drone" that inspired their drones and used them to create a clone of the creature inside i.e the Dalek Scout mutant.

Robertson is disgusted by this and tells Leo to destroy the creature, the scientist tries to dispose of the Dalek, only for the mutant to take control of his mind and they head to a secret lab in Osaka where Daleks are being created.

Meanwhile, The Doctor is still in prison after being arrested at the end of the previous episode and reunites with old friend Captain Jack Harkness (with John Barrowman reprising the role), who breaks her out and they head back to Earth where the fam informs The Doctor of the situation.

Following this, Team TARDIS splits up in two groups with Captain Jack and Yaz looking into the lab in Osaka while The Doctor, Ryan and Graham confront Robertson, who shows them the Dalek factories before he's informed of a secret facility in Osaka. They head there and come face to face with the Scout Dalek controlling Leo, who reveals what it has been up to along with its plan to conquer the Earth.

And following this, its all downhill for everyone as The Daleks take over the Dalek drones and begin attacking everyone. Thinking up a solution to the problem, The Doctor sends out a message through time and space to a Dalek Death Squad, which arrives on Earth and takes care of the "impure" Daleks before wiping out the Recon Scout despite its claim that it is still a Dalek.

Robertson betrays The Doctor and joins the Daleks, offering an alliance with them. But this doesn't last long as The Doctor formulates a way to defeat The Daleks and tricks them into entering a spare TARDIS, thinking that its hers. Robertson lies to The Doctor, saying he was offering himself up as a decoy and is then celebrated as a hero by the world.

Captain Jack says goodbye to The Doctor and leaves with Ryan and Graham deciding to leave her too so they can continue with their normal lives while Yaz stays with The Doctor. The episode ends with Graham teaching Ryan to ride a bike, just like in their debut episode.

I give this story a 9/10, Doctor Who never ceases to boggle the minds of Whovians and knows how to tell a fantastic story in every way. When the Daleks show up, you know there's bound to be fun storytelling in whatever episode of Doctor Who they appear in. I'll never forget this episode, it is so memorable just like many of the recent Doctor Who episodes that have come out over the last couple years despite some road bumps in this journey. Now, I bid you farewell. Next time, we're covering FLUX and EVE OF THE DALEKS!