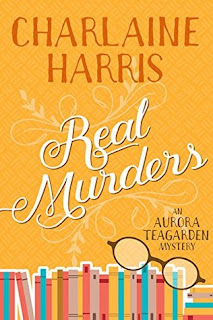 Real Murders by Charlaine Harris is the first book in the 10 books series - Aurora Teagarden mysteries. Once upon a time I wouldn't have noticed the writing style or the voice of the character and would have just enjoyed the cozy mystery, thinking the character was slightly weird or missing a few brain cells or just young for her age. I couldn't make up my mind whether I disliked Aurora or the writing which drove me crazy with all the telling vs showing.  There were several times I almost quit reading because Aurora annoyed me, but liked the premise and didn't have a clue who committed the murder, so was pleasantly surprised.  Written mostly in passive voice with many begin's, began's, was's, and seemed, which had me rewriting the sentences in my head and throwing me out of the story.
Realize I have to cut Charlaine some slack since Real Murders is her debut novel written back in 1990 and she's since grown in style and substance.  I read the Sookie Stackhouse series a few years ago, plus Midnight Crossroads more recently which were both excellent.
The funniest exchange which had me giggling.

“If you want him to notice you as a woman, just lust after him.”

“I don’t mean lick your lips or pant. Keep conversation normal. Don’t do anything obvious. You have to keep it so you don’t lose anything if he decides he’s not interested.” Amina was interested in saving face.

“Just lust. Keep everything going like normal, but sort of concentrate on the area below your waist and above your knees, right? And send out waves. You can do it. It’s like the Kegel exercise. You can’t show anyone how to do it, but if you describe it to a woman, she can pick it up.”

And this was just out kinda out there. Chicken Pox?

"It was such a nice little morning I decided to go to church. I often did. I sometimes enjoyed it and felt better for going, but I felt no spiritual compulsion. I went because I hoped I’d “catch it,” like deliberately exposing myself to the chicken pox. Sometimes I even wore a hat and gloves, though that was bordering on parody and gloves were not so easy to find anymore. It wasn’t a hat-and-gloves day, today, too dark and rainy, and I wasn’t in a role-playing mood, anyway."

Loved the premise and the ending so worth the read.  It may behoove Harris to give the series an editing upgrade at some point to freshen up the story for new readers as some authors have done with their backlists