Bookish Notes: And Then There Were Nuns by Jane Christmas 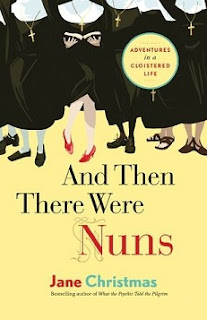 Jane Christmas has a fiancée who knows her well and is full of patience.  Perhaps because he's known her so long, it's the reason he waits for her to decide what she wants to do with her life.  For she has had a life long desire to become a nun. A cloistered one at that.  She desires to spend her days in contemplation and prayer, listening to God.  Or so she thought. Was she seeking fulfillment and faith or something else.

Little did she realize that falling into silence and routine would awaken the trauma of a past sexual assault, buried so deep, it'd become part of her soul and she needed to face it and work out the pain of the past.  As Jane battles her personal demons and tries to fit into the life of a cloistered community, she learns quite a bit about herself.

While developing a closer relationship with God, she learns about the needs within a religious community, the differences between the Anglican and Catholic church and what religion and faith really mean.   The cloistered convents guest houses and cells (bedrooms) reflected the beauty or ugliness of each, a visual representation of each religion.   The Anglican nuns were open and nonjudgmental versus the Catholic who were strict, by the book, and not open to allowing a divorced woman become a nun.

Jane learns she couldn't fit into anyone's box. Her story is one of faith, forgiveness, friendship, redemption, and trust.  Add in church politics, history, the needs and wants of the religious community which made for a very interesting story indeed  And Then There Were Nuns is full of inspiration, inspiration, humor, tears, and well worth reading.

"That’s what faith is to me, a grand adventure of the soul, at times exhilarating, at times disappointing. Sort of what Chesterton was saying. Faith is not the surrender of the mind, as some have characterized it, but the expansion of it, and of the heart and spirit as well. It is head-scratching, yes, weird at times, nonsensical, but also brilliant and moving in its simplicity and in the good it succeeds in doing."

“Pay attention to yourself. Life is about our willingness to change and take risks, and we get those cues from our hearts and our intuition. Likewise, and this is just as important, pay attention to your overreactions: when someone gets under your skin, ask yourself why that is. What have they stirred up?"

"God, not the church (any church) is the goal. Or to put it more crudely: if God is the destination, churches are the gas stations along the route. Then again, to some, God is the destination and churches are the bureaucratic city works department that erects roadblocks and sends you on frustrating detours that eventually force you to throw up your hands and say, “Oh, to hell with it; there’s got to be a better route.” As Dietrich Bonhoeffer once opined, people come to church in a spirit of hope and openness but leave as if they’ve staggered from a maze of mind-boggling bombast."

"Here’s the thing about prayer: It doesn’t require fancy words, or a theology degree. It doesn’t even require you to be articulate on any level. Sometimes my own prayers are so scrambled and banal that I wonder whether God thinks English is my second or third language. But therein lies the beauty of it. Vocal articulation is unnecessary. You can sit in silence and sputter out your thoughts telepathically."