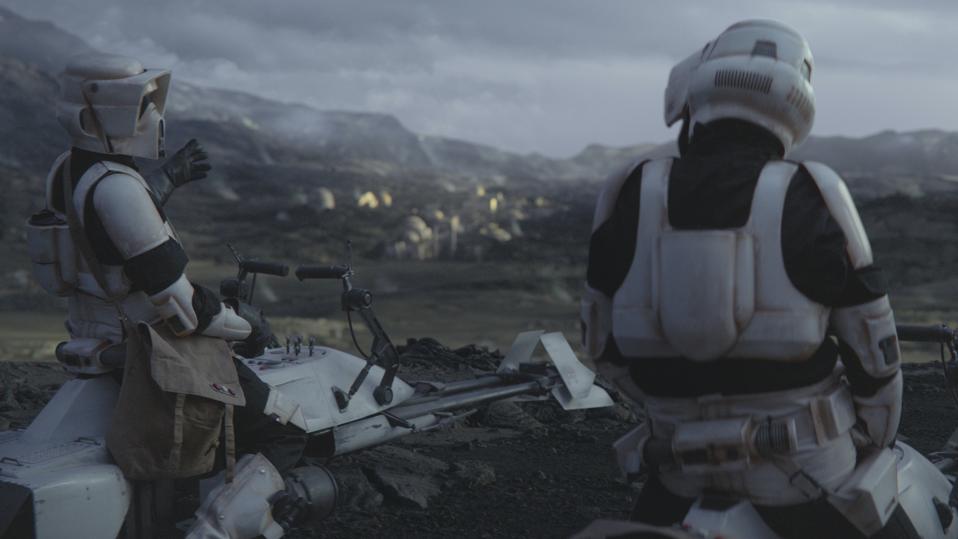 Salutations people, James M here and today we will be reviewing the 8th and final episode of the first season of The Mandalorian which is the epic Star Wars TV show on Disney Plus. So, lets skip the recap if you want and jump right into the plot...

Plot:
The episode picks up where the last episode left off with the Mando and his friends confronting Moff Gideon and his army of Imperial Remnant stormtroopers on the planet Nevarro in order to defeat the imperials and protect Baby Yoda aka The Child, which was captured by a group of scout troopers at the end of the last episode.

On the way back to the town where the face off is happening, the scout troopers stop and, as they wait for their next orders, they chat and complain about Moff Gideon all while actually hitting the baby which proves to be a death sentence for them as IG-11 shows up and takes them out, retrieving the Child as part of his programming to keep the little one safe.

Inside the city, Moff Gideon and his squad of Stormtroopers and Death Troopers have the Mando, who's real name is revealed to be Din Djarrin, Cara Dune and Greef Karga cornered and almost outgunned. But things start to turn around when the heroes find a way to escape via a sewer grate, the only issue is the imperial forces. IG-11 shows up and guns the bad guys down while protecting Baby Yoda, even though its not a wise idea to bring a young child to a big huge violent battle.
During the chaos of it all, Din gets shot up and injured and the heroes struggle to open the grate inside the building they were in when Moff Gideon's forces attacked in the last episode. A flametrooper enters the fray and the heroes nearly get fried but Baby Yoda uses the force to stop the flames and burn the stormtrooper, completely roasting him.

The heroes flee into the sewers and make their way into the hideout of Din's foster family only to learn that the Imperials decimated most of the Mandalorians while a few escaped and left only one survivor. The survivor in question is none other than The Armorer, who has been an important character for most of the season and uses material to make pieces of armor for Mandalorians. The Armorer sees Baby Yoda and learns that Din had help in defeating the Mudhorn in season two, allowing Din to get his Mandalorian signet while the Armorer declares him to be the baby's adopted papa, entrusting The Child in his care.

Imperials soon arrive and the heroes escape while the Armorer keeps the stormtroopers busy and takes out a whole ton of them. Din, Cara, IG-11 and Greef make their way to a river of lava upon which they take a boat ride. At the end of the tunnel, stormtroopers await for them and IG-11 uses his self destruct mechanism to destroy the Imperials that were going to ambush the heroes.

Moff Gideon shows up in his TIE Fighter and Din uses his newly acquired Jet Pack to fly and go after the moff's tie fighter. After a struggle, the Mando takes down the Tie Fighter and seemingly ends the Moff's reign of terror. Din reclaims Baby Yoda and parts ways with Greef and Cara before taking off in his ship. As the episode ends, it turns out Moff Gideon is still alive and he breaks out of the ruins of his crashed ship using none other than the Darksaber from The Clone Wars and Rebels, ending Season One of the show.

Thoughts:
The episode was pretty action packed and ended the show's first season with a bang. The Mandalorian has been a huge success and fans love it. Season Two will be coming out way later in the fall of 2020. Episode 8 titled Redemption gets a ten out of ten.

With that, I close out my review.
See you all next time people!
-James M