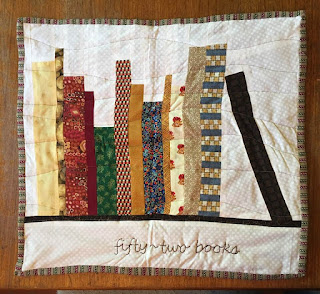 I've had a great start to my reading year and still working on January's Blossomology challenge spelling out Chrysanthemum and have H A E U and M to complete.  I decided to spell out using author names and have been successful so far.  Thank goodness February's challenge is to spell out Rose.  My reading goals this year are to read more physical books from my shelves, not spend any money on books for the first four months of the year and to read more non fiction.

I finished twelve books this month including five nonfiction books, three of which were started last year.  James and I read Netanyahu's Fighting Terrorism and Leon Leyson's Boy in the Wooden Box together which took a bit of time. Reviews will be forth coming.   One of my goals is to read at least two non fiction books a month.  I completed Writing Down the Bones and Thoughts in Solitude, plus sailed from Peru to Polynesia with Thor Heyerdahl in Kon-Tiki.

Started out my 52 books Open Roads adventure in Japan with Haruki Murakami and the first two books in his Rat Trilogy - Hear the Wind Sing and Pinball. I visited 12th century England through The Anchoress and 15th Century England through The Sunne in Splendour.   Explored the fantasy world of Venice with Cogman's The Masked City and the United States during an apocalyptic alien invasion in The Infinite Sea.   I traveled through history with Doucette's The Immortal from the beginning of man to the Roman Empire to the United States.  Then finished off my month with His Road Home, a romantic novella about a soldier disabled in war discovering how to walk, talk and love.  Quite an eclectic mix of stories.

Another goal is to read more slowly and do a review for each book completed.  I'm slightly behind with reviews on the four books that didn't match up with the flower spelling challenge.

I'm currently reading Mark Helprin's A Soldier of the Great War (chunky and dusty book) as well as Murakami's A Wild Sheep Chase (ebook) which is the 3rd book in the Rat Trilogy.    I'm trying to decide whether to read Leon Uris or Umberto Eco for my U book.  I'm thinking Achebe for the A book.

I also have ROSE to spell for February and won't be constraining myself to just author names and mixing it up with Author Name or Title of the book.  I received J.D. Robb's newest in her In Death series - Dark in Death which I pre-ordered in December so doesn't go against my buying ban.  So I may be mixing up things a bit because her book is calling my name loudly.  *grin*

Meanwhile our 52 Books group will be traveling through England for February so I'm pulling a very dusty Sherlockian by Graham Moore off the shelves to read.