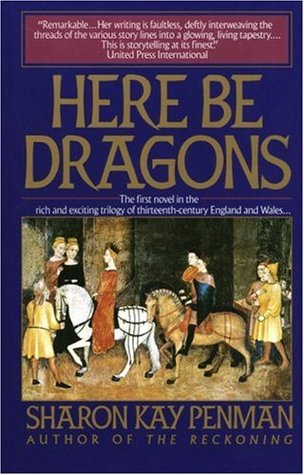 Author Synopsis: Set in the 13th Century, Here Be Dragons is the story of King John and his England. A paradoxical man, he was charming, generous, clever -- and he was unstable and brutal. He was capable of great kindnesses, but he butchered child hostages. He was the youngest son and favorite of Henry Plantagenet, but he would betray his father in order to seize the throne of England. For centuries, history recorded him as a bad king, upon whom the Magna Carta was forced. Yet history also tells us he was intent on bringing a measure of justice to his realm in the face of his greedy barons' refusal to accept the law.

Here Be Dragons is also the story of Llewelyn the Great of Wales. At 14, he began a civil war; by 21, he held all North Wales. He was John's vassal -- and most bitter enemy. His dream of a free and united Wales, unencumbered by English laws or lords, was to spur a lifelong crusade that left little time for peace or pleasure.

And, at its heart, Here Be Dragons is the story of Joanna: daughter to one, wife to the other. Bastard-born, hidden from her father until her embittered mother's death, then brought, a bewildered five-year-old, to John's court. He would cherish her, cosset her,and yet use her as a political pawn, marrying her off at fifteen to a wild Welsh prince She was terrified, but he was the father she adored and obeyed. Wife to Llewelyn, whom he came to love, daughter to John, whom she worshipped, Joanna was trapped in the crossfire of their implacable enmity. Told with a richness of detail that brings the England, France, and Wales of the thirteenth century fully to life, Here Be Dragons combines high drama, romance, adventure, and authentic historical fact.

I inherited quite a few historical and historical fiction books about Britain from my late, very English, mother in law. I think the whole reason I came up with the Centuries challenge was so I'd have some incentive to read some of the books.  I finally read Here Be Dragons and took a trip through the 13th century with King John, and Lleweleyn - Prince of Wales, who married John's daughter Joanna to form an alliance between England and Wales. Political intrigue and infighting, arranged marriages, wars between England and Wales, England and France, threats by the Pope to excommunicate everyone involved, fluid political alliances. Penman took a very dry subject, at least for me, and made it interesting. She personalized the characters, taking you inside their heads and lives, from childhood to death.Once starting reading it, found it very hard to put down and the story, the characters stayed in my head, drawing me back to the story. Thoroughly enjoyed it and look forward to reading the rest of the Welsh princes series.