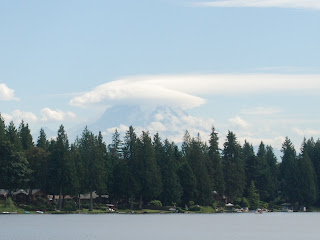 We've been back a few days now from Washington, basically being lazy and recovering from our vacation.  Had an absolutely wonderful time.   A few months back during Brenda Novak's Diabetes auction I won the bid on a week long stay at Cherry Adair's guesthouse on Lake Morton.  We picked a perfect time to go.

The day we arrived it was raining, but cleared up after that and it was gorgeous, sunny and clear until the day we left.   We arrived to Cherry greeting us with fresh home made cookies and one of her beautiful schnauzer dogs, Chase.

The morning after we arrived, I walked out on the back deck and there was Mt. Ranier in all it's glory.   Found out later that you can't see the mountain 75% of the time because it's too cloudy.  We got to see it for five of the days we were there.  The grounds and garden of the property are beautiful and hubby took a million pictures.  I'll post a few on facebook to share.

We had lazy days interspersed with fun filled days going to the Seattle Aquarium in which I finally got up close to a octopus and personal with the sea life in the exhibit pools.

Afterwards, we decided to hike up the Pike Street Hill Climb to Pike's Market. Little did I realize we were approaching it from the wrong end and when we reached the top of these steps, that we'd have to trudge up an equal amount of steps into the market.   None of us had the energy by this point and turned around, walked back down and went to Fisherman's Restaurant and Bar next to the Aquarium.  Delicious food and enough to bring home in a doggy bag to feed all three of us dinner the next night.

We also had the opportunity to go to the Future of Flight Aviation Center and Boeing Tour. The day we were there, Boeing received certification for the new 787 Dreamliner.  During the tour we got to see the 747, 767, and the 787 in production.  We weren't allow to take any pictures during the tour since they do have some secrets to keep.  Check out their website though which has plenty of info if you are interested.  It was awesome seeing these planes in production. The plant is 98 acres so in order to get from one end of the plant to the other, you have to take a bus.  Boeing uses a huge cargo plane called the Dreamlifter to transport airplane parts and two were on the grounds. 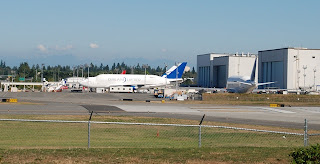 On our last day there, we went out paddleboating around the lake.   I had to bribe James and the incentive was getting to see girls in bikinis.  *grin* 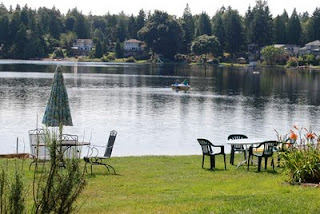 After we took a short trip, Father and I went around the lake.  Here's the view of the property from the lake. 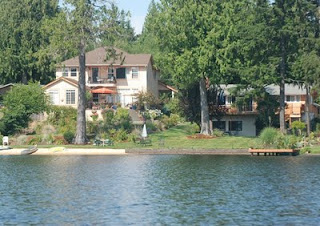 I also got to have a long chat with our lovely hostess about writing, books and life.