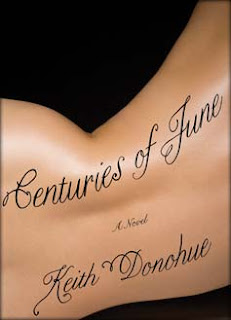 "Motionless on the edge of the tub, the figure of my father sat in the exact spot.  A tiny pinfeather stuck out like a flag from the prodigious wrinkle of his brow.  He did not drain his glass in a single gulp as might be expected of the parched.  Rather, he held the tumbler to the light, judged the liquid's clarity, sniffed its bouquet, rinsed his palate with a mouthful and only then swallowed.  The whiskey warmed him, brightened his eye, and raised the flow of blood to his pale skin.  He sipped another mouthful and the dryness vanished from his breathing, and he looked almost alive.  When he cleared his throat again, no feathers flew out of his mouth."    pg 10


Centuries of June by Keith Donohue


Teaser Tuesdays is a weekly bookish meme, hosted by MizB of Should Be Reading. Anyone can play along.
at August 02, 2011