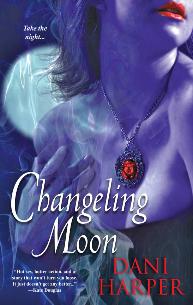 Changeling Moon:  "He roams the moonlit wilderness, his every sense and instinct on high alert.  Changeling wolf Connor Macleod and his Pack have never feared anything -- until the night human Zoey Tyler barely escapes a rogue werewolf's vicious attack.  As the full moon approaches, Zoey has no idea of the changes that are coming, and only Connor can show her what she is, and help her master the wildness inside.  With her initiation into the Pack just days away and a terrifying predator on the loose, the tentative bonds of trust and tenderness are their only weapons against a force red in tooth, claw...and ultimate evil." 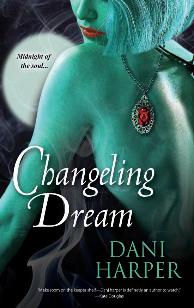 Changeling Dream:In times of stress Jillian Descharme has always found calm in her dream of a great white wolf with haunting blue eyes. But she is startled when the visions return and this time seem so real. Late at night he comes to her, speaks to her, touches her.

Thirty years ago James Macleod lost his wife and unborn child to a killer bent on destroying the Changelings. Though he longed for death, his animal instinct fought for survival and James has been a wolf ever since. Yet now a woman has reawakened the man in him, taming wild instincts but arousing still wilder needs. With his ancient enemy hunting the legendary white wolf, James must fight for new life, new hope, new love."

Changeling Moon (released May 31st) and Changeling Dream (released June 28)  are book 1 and 2 in a new shapeshifter series from Dani Harper.   Changeling Dream was originally published as an ebook called Heart of the Winter Wolf and was so popular Kensington Brava offered Dani a book series.  The stories center around the Macleod family and their pack living in a small town in Canada.

In Changeling Moon, Connor is the town's veterinarian.  Coming back from a call one night, he saves Zoey from a vicious wolf attack.  One of their own has gone rogue. Zoey just happens to be the town's newest reporter for the local newspaper which makes it really difficult for Connor to try and hide his true nature.   They have a great on page chemistry and Harper has done an excellent job creating a great cast of supporting characters who are very engaging, somewhat quirky. Think Northern exposure only with werewolves!

Changeling Dream continues the story centering around Jillian, who is Connor's new partner and his brother, James.   James wife and child were killed by a crazed gunman bent on killing the changelings.  Depressed and suicidal, he reverts to his wolf form, hoping to die. His wolf takes over and keeps him alive.  He comes across Jillian, while in wolf form and saves her from a deadly attack. Years later when Jillian arrives to work for Connor, the wolf recognizes her and for the first time in years, starts to think of being human again.

Dani Harper has done an great job of creating a fresh, new paranormal series centered around werewolves.  There is enough suspense, mystery and action to keep you engaged in the stories.  I'm looking forward to Changeling Dawn when it comes out January 2012.  If you like paranormal romances, I highly recommend reading the Changeling series.

Many thanks to Leyane of FSB Associates for providing me with courtesy copies of the books and Dani Harper for writing such interesting stories.

Love Vampires
"Overall I liked Changeling Moon and found it to be an undemanding, fun read. It has some quality writing; in particular the secondary characters are all interestingly quirky and originally developed."

Bookloons:
"I usually find sequels pale in comparison to the first book in the series, especially when the first is as excellent as Changeling Moon. But Dani Harper managed to create another howling masterpiece."


All comments and opinions based on my reading experience and not influenced in any way,  shape or form by outside influences.
at July 20, 2011