H is for Heat Wave by Richard Castle

Back Cover:  Mystery sensation Richard Castle, blockbuster author of the wildly bestselling Derrick Storm novels, introduces his newest character, NYPD Homicide Detective Nikki Heat.  Tough, sexy, professional, Nikki Heat carries a passion for justice as she leads one of New York City's top homicide squads.  She's hit with an unexpected challenge when the commissioner assigns superstar magazine journalist Jameson Rook to ride along with her to research an article on New York's finest.  Pulitzer Prize-winning Rook is as much a handful as he is handsome.  His wise-cracking and meddling aren't her only problems.  As she works to unravel the secrets of a murdered real estate tycoon, she must also confront the spark between her and Rook. The one called heat.

I'm reminded of the Irving Berlin song "We're having a heat wave"
We're having a heat wave,
A tropical heat wave,
The temperature's rising,
It isn't surprising,
She certainly can can-can.
I'm a big fan of  the tv show "Castle" so was quite overjoyed to finally get my hands on Richard Castle's "Heat Wave."
Wait? you say. Isn't he fictitious? Why yes, my darlings.  ABC hired a ghost writer to write the books, although Nathan Fillon is doing author appearances and book signings.  The Nikki Heat series started with Heat Wave, then Naked Heat and the next book to be released in September,  Heat Rises.
There are many similarities to the TV show, but also some differences.  The story is told totally from Nikki Heat's point of view and from her viewpoint, Jameson Rook is a pain in the behind.  She really doesn't like him, though they do have their 'moments' which can be blamed on the heatwave and a black out and other circumstances.  She is in the process of trying to solve the murder of a wealthy real estate developer and neither the murder victim or his wife turn out to be who they appear to be. There are a few twists and turns and you aren't quite sure who the murderer is until the very end.  Heat Wave is  very well done and a fun read. 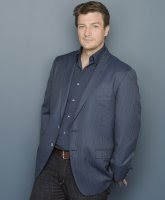 Richard Castle is the author of numerous bestsellers, including the critically acclaimed Derrick Storm series. His first novel, In a Hail of Bullets, published while he was still in college, received the Nom DePlume Society’s prestigious Tom Straw Award for Mystery Literature. Castle currently lives in Manhattan with his daughter and mother, both of whom infuse his life with humor and inspiration.