F is for Forsaken by Shadow by Kait Nolan 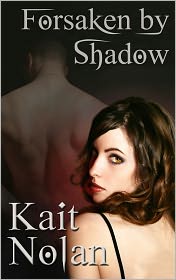 
Barnes and Noble Synopsis: "Banished from their world with his memory wiped, Ultimate Fighter Cade Shepherd doesn’t remember his life as Gage Dempsey, not even the woman he nearly died for. But when Embry Hollister’s father is kidnapped by military scientists, the only one she can turn to for help is the love from her past. Will Gage remember the Shadow Walker skills he learned from her father, and if they survive, will Embry be able to walk away a second time?"


I discovered Kait Nolan through Row80. She is the brain behind the challenge and since I'm always on the look out for good books by blogging authors and of course love paranormal romances, had to check out Forsaken by Shadow.

I was hooked from the get go.  Cade Dempsey wakes up in a hotel room, burns on his hands and no idea who he is.  He drives himself to the hospital and finds out he'd been missing since he was a child.  He remakes himself into an ultimate fighter but can never stop thinking about the missing part of his life.  Embry comes back into his life and reintroduces him to the world of  Shadow walkers and the supernatural world surrounding him.  Kait Nolan does a fabulous job of pulling you into the three dimensional world of Cade and Embry and keeping you gripped in the action of the story.   My only complaint is the story ended too soon for me. I wanted more.  Forsaken by Shadow is the first e-book novella in the Mirus series, followed by Devil's Eye which I'll be reading soon.

You can check out a free sample of the book on her website or buy where ever e-books are sold.

Fiction Vixen:
"The world that Kait Nolan has created is interesting in that she incorporates some of the familiar paranormal elements along with a bit of the unexpected. Along with that she adds in a good mystery, and a lot of action, and suspense"

Paromantasy:
"Once I started, I could not put this book down. Forsaken by Shadow is fresh, well-written and an absolute must read. You will be on the edge of your seat trying to keep up with this fast paced paranormal romance that will leave you breathless!"
at February 04, 2011