A Hope Undaunted by Julie Lessman 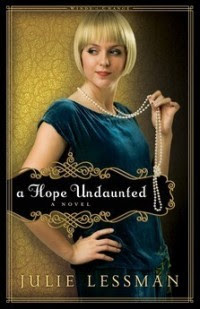 A Hope Undaunted
By
Julie Lessman

Back Cover:  The 1920's are drawing to a close, and feisty Katie O'Connor is the epitome of the new woman-smart and sassy with goals for her future that include the perfect husband and a challenging career in law.  Her boyfriend Jack fits all of her criteria for a husband--good looking, well-connected, wealthy, and eating out of her hand.  But when she is forced to spend the summer of 1929 with Luke McGee, the bane of her childhood existence, Katie comes face to face with a choice.  Will she follow her well laid plans to marry Jack? or will she fall for the man she swore to despise forever?

Katie is 18 years old and very headstrong, keeps breaking curfew staying out late with her boyfriend Jack and her father has decided to do something about it.  She will spend the summer, grounded and working as a volunteer for the Boston Children's Aid Society.  She wouldn't mind it so much but there's one problem.  The poor boy from the wrong side of the tracks, she used to fight with so much growing up, Luke "Cluny" McGee is one of the law partners running the society.   They clash big time.  They are both attracted to each other but Luke simply doesn't fit into Katie's plan for her future.  The sparks fly and things get difficult for both Katie and Luke when extenuating circumstances threaten to keep them apart.  I thoroughly enjoyed A Hope Undaunted which also continued following the lives of Katie's parents and siblings marriages and love lives.  I highly recommend it.

Thank you to Amy (My Friend Amy) of Winsome Media Communications for asking me to be a part of the blog tour, Revell publishing for providing me with a courtesy copy of the book and Julie Lessman for writing such a wonderful cast of characters.   She's gained a new fan.

Pages:  505
Publisher: Reveal
Released:  September 1, 2010
Genre: Christian Historical Fiction
Other Thoughts:
Staci from Life in the Thumb:
"Characters were not portrayed as do-gooders with no faults. Lessman painted realistic people with problems that are prevalent in contemporary times."
Christy of Critty Joy Books:
"It amazes me how one person can create a 500+ page novel that has all the twists and turns of your favorite roller coaster! Julie had me laughing, crying, and at one point mad enough to want me to throw the book across the room."
Nicole of Into the Fire:
"The title A Hope Undaunted speaks for many individuals in this story. The peripheral characters get careful consideration in the scope of the tale, presenting the unique family components and how they mesh into each other’s lives."
at September 25, 2010