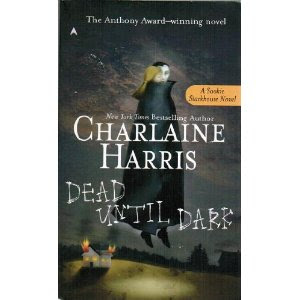 Sookie Stackhouse Southern Vampire Series -  Charlaine Harris
When I was introduced to Sookie Stackhouse in Dead Until Dark, (Thanks to BethFishReads) I couldn't stop at the first book and devoured the whole series in a number of days.  Just giving away  Dead Until Dark would be such a tease, so for BBAW I am giving away the series, books 1 through 9.  You'll have to buy #10 Dead in the Family for yourself. I'm waiting for it to come out in paperback.
The package giveaway includes the gently read, paperback editions of
Dead Until Dark
Living Dead in Dallas
Club Dead
Dead to the World
Dead as a Doornail
Definitely Dead
All Together Dead
From Dead to Worse
Dead and Gone
Please leave your name and email address in the comments.  The contest is open to U.S. Residents only, will remain open for the week and ends at Midnight on September 17th. The winner will be picked via Random.org and notified via email.
at September 13, 2010