Faith, hope, charity and God - Telling it like it is 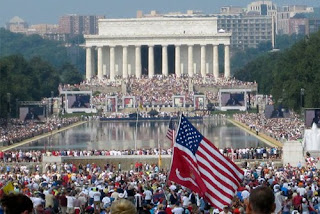 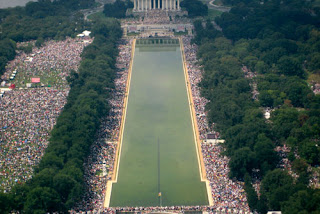 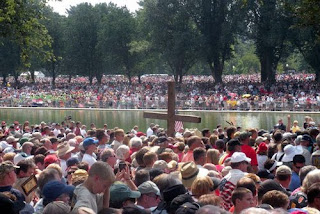 Look at these pictures. Isn't that the most amazing sight!

Hundreds of thousands of people traveled to Washington DC to join in the 8/28 Honor rally put on by conservative news talk show host, Glenn Beck.   I watched part of the rally live on Facebook, then watched the whole thing on Cspan.   It was interesting to read the newspaper reports the next day.   The New York Time treated the rally fairly and other newspapers not so fairly.  People either love him or totally hate him.
However, all of them missed the  the true scope of the rally. The pundits talked about who was there but they didn't report on the purpose or what really happened. It wasn't all about Glenn Beck, he simply made it happen.
One of the main reasons for the rally was to raise funds for the Special Operations Warrior Foundation.   Do you remember Desert One, when our special forces attempted a Iranian hostage rescue. Many of the men were injured or killed.  The fund was created to take care of their children, to provide them with an education.

The Warrior Foundation is currently committed to providing scholarship grants, not loans, to more than 800 children. These children survive more than 700 Special Operations personnel who gave their lives in patriotic service to their country, including those who died fighting our nation's war against terrorism as part of "Operation Enduring Freedom" in Afghanistan and the Philippines as well as "Operation Iraqi Freedom."

The goal of the Honor rally was to raise enough money to help provide grants to all our special forces children.  More than $5 Million was raised.   I did not see this mentioned in any paper or on any newscast.
Sarah Palin spoke at the Rally. She wasn't there in a political capacity, she was there as the mom of a soldier.  She was there to tell the stories of three American soldiers:  Marcus Luttrell, the sole survivor of a mission in Afghanistan:  Eddie Wright, who despite having his hands blown off when his company was ambushed in Fallujah, lead his company to safety; and Tom Kirk, a combat pilot who spent 5 years as a POW in what was known as the Hanoi Hilton.  Did you hear about any of this in the papers?
Three medals, designed by Glenn Beck, representing Faith, Hope, and Charity  were handed out to three outstanding citizens.  The medal for Faith was given to Reverend C.L. Jackson who told the story of when he was a boy and standing on the mall, watching and listening to Martin Luther King give his "I had a dream" speech.  The hope medal was given to baseball star Albert Pujols and the Charity medal to billionaire philanthropist John Huntsman.
Dr. Alveda King, the niece of the late Martin Luther King and daughter of A.D. King, also spoke and honored her uncle Martin Luther King.
Over 200 clergymen/women from every religion joined Beck on stage in a show of christian solidarity.  Beck said "although we don't agree on the fundamentals, we all believe in God."
The Rally was partially an old fashioned religious revival and partially to honor our military and military veterans.  There were no politics involved.  It is interesting to note that for a crowd that size, it was peaceful and not one arrest had to be made.  It is also interesting that for a crowd that the size, the national park service is reporting that they all cleaned up after themselves and no trash was left on the mall.   May seemed insignificant to most, but remember with woodstock or any other concert that has even been held - the mess that had to be cleaned up.
Anyway, whether you agree with Glenn Beck or not, he has polarized many people. I don't always agree with him myself, but he makes you think and ask questions and not accept blindly what the news says.
As my husband always jokingly says:  "Don't confuse the issue with facts"