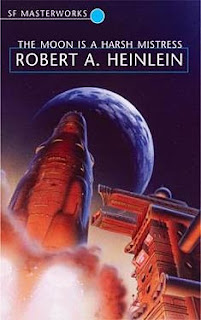 SFF Masterworks # 72
The Moon is a Harsh Mistress
By
Robert Heinlein
Teaser
Book One - Chapter One -   That Dinkum Thinkum
"I see in Lunaya Pravda that Luna City Council has passed on first reading a bill to examine, license, inspect--and tax---public food vendors operating inside municipal pressure. I see also is to be mass meeting tonight to organize "Sons of Revolution" talk-talk.
My old man taught me two things: "Mind own business" and "Always cut cards."  Politics never tempted me.  But on Monday 13 May 2075 I was in computer room of Lunar Authority Complex, visiting with computer boss Mike while other machines whispered among themselves.  Mike was not official name; I had nicknamed him for Mycroft Holmes, in a story written by Dr. Watson before he founded IBM.  This story character would just sit and think--and that's what Mike did.  Mike was a fair dinkum, thinkum, sharpest computer you'll ever meet.
Not fastest.  At Bell Labs, Bueno Aires, down Earthside, they've got a thinkum a tenth his size which can answer almost before you ask.  But matters whether you get answer in microsecond rather than millisecond as long as correct?
Not that Mike would necessarily give right answer; he wasn't completely honest.
When Mike was installed in Luna, he was pure thinkum, a flexible logic--"High-Optical, Logical Multi Evaluating Supervisor, Mark IV, Mod. L."--a HOLMES FOUR.  He computed ballistics for pilotless freighters and controlled their catapult.  This kept him busy less than one percent of the time and Luna Authority never believed in idle hands.  They keep hooking hardware into him--decision action boxes to let him boss other computer, bank on bank of additional memories, more banks of associational neural nets, another tubful of twelve-digit random numbers, a greatly augmented temporary memory.  Human brain has around ten-to-the-tenth neurons.  By third year Mike had better than one and a half times that number of neuristors.


And woke up."
Excerpt: Chapter one pg 11 - 12
My review is live and kicking on the SFF Masterworks blog. Come on over and check it out. Be sure to check out the other reviews and follow for more fascinating thoughts about the Science Fiction and Fantasy Masterworks.
at July 19, 2010