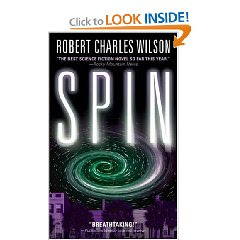 Back cover:  "The time is the day after tomorrow, and three adolescents---Diane and Jason Lawton, twins, and their best friend, Tyler Dupree--are out stargazing.  Thus they witness the erection of a planet-spanning shield around the globe, blocking out the universe.  Spin chronicles the next 30-odd years in the lives of the trio, during which 300 billion years will pass outside the shield, thanks to an engineered time discontinuity.  Jason, a genius, will invest his celibate life in unraveling cosmological mysteries.  Tyler will become a doctor and act as our narrator and as Jason's confidante, while nursing his unrequited love for Diane, who in turn plunges into religious fanaticism.  Along the way, human-descended Martians will appear, bringing a drug that can elevate humans to the Fourth State, 'an adulthood beyond adulthood.'  But will even this miracle be enough to save Earth?... "

"Spin" is the 2006 Hugo award winner for Best Novel.   Father bought it for me for Christmas because it was on my wish list to read for Mind Voyages Challenge.

Have you ever feel ambivalent about a story and couldn't make up your mind whether you liked it or not?  I was left with that feeling after reading Spin.   The premise is certainly interesting.    An unknown life form suddenly places a shield around earth.  Supposedly it is to protect the earth from a sudden acceleration in the world's time continuum.  The characters don't know that until they fire a rocket at the shield and when it crashes back to earth  a few moments later, weeks of data is recovered.  The government and scientists figure out through firing test rockets through the shield that for every earth second, 12 years passes on the outside of the shield. They figure out a way to use the difference in time to seed mars and start a colony, so that when and if the shield around earth collapses, life will be preserved.   However, they didn't count on the aliens eventually putting a shield around Mars to protect it as well.
Mixed in with the technological aspects is the story of Jason, Diane and Tyler and how their lives are affected.   I really didn't feel any emotional connection to any of the characters.  They weren't really likable in any sense.  Perhaps because each in his own way was emotionally flawed which affected their story.  I never did get any sense of why the aliens were protecting earth or who they were and it seemed parts of the story was rather ambiguous.  I admit Spin is well written and interesting enough to keep you reading because you want to find out what is going to happen. The reviews are mixed so you'll have to decide for yourself.
Pages:  464
Publisher: Tor
Released:  February 7,2005
Genre:  Science Fiction
Other thoughts:
Science Fiction and Fantasy reviews:
"Spin is a rich and rewarding novel that proves idea fiction need not lack for warmth, and that humanist fiction need not pander to easy emotional button mashing that insults the intellect. There's as much here in the way of good hard SF speculation as there is emotional truth about how we look at life and death, at those we love, and at ourselves. That's why Robert Charles Wilson is such a powerful SF writer. He imagines startling futures, and he understands people. When it comes to the truth, he doesn't spin."
Challenging Destiny:
"All along the reader is wondering: this book has been spectacular, but will there be an explanation of the Spin and will it live up to what's come before? Clearly, whoever made the Spin wants the people of Earth to wait for something -- this is mentioned several times in the book and the conclusion of the story (which I will not reveal) backs that up, at least partially."
A Dribble of Ink:
"Spin succeeds on what Wilson set out to do, telling both a good Science Fiction take and a good coming-of-age tale. The problem, however, is that neither ever manages to grasp onto that greatness that seems just out of reach."
FTC:  The book was a gift and I have not been compensated for the review.  Link to amazon for informational purposes only.
at April 28, 2010