The Mists of Avalon by Marion Zimmer Bradley 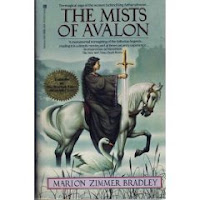 The Mists of Avalon


"Here is the magical legend of King Arthur, vividly retold through the eyes and lives of the women who wielded power from behind the throne.

There is the darkly bewitching Morgaine, half sister to Arthur and a high priestess in the enchanted land of Avalon, where women rule as the creators of life and keepers of knowledge. For Morgaine, there is but one quest: to wrest Britain away from Christianity--the new religion which views women as the carriers of original sin--and to return it to the worship of the Mother Goddess.

The fair and lovely Queen Gwenhyfar is torn between her duty to her king and the new God, and her passion for the dashing Lancelot. Both women struggle and suffer, and both--in their own extraordinary ways--triumph."

I read "The Mists of Avalon" by Marion Zimmer Bradley as part of the Heather's Take a Dare challenge.   Written back in 1982 is a retelling of tale of King Arthur from the view of three women:  His mother Ingraine, his sister Morgaine and his wife Gwynhefar.  It is a chunkster at 876 pages and well worth reading.   It is chock full  of action, deceit, cunning, romance, plotting, bravery, magic, political and religious conflict, pagan rituals and a interesting menage a trois.

We have Ingraine, who is married to Gorlois, mother of Morgaine and sister to Morgause and Viviane, the Lady of the lady, the high priestess of Avalon. Her father is Taliesin, Merlin of Britain and the archdruid. Both Merlin and Viviane foretell Viviane will betray her husband, marry another and give birth to Arthur, the future King.

According to Viviane, Morgaine is destined to take over as Lady of the Lake, when she eventually passes on. Morgaine goes to Avalon for training to become a high priestess and there she meets Lancelet, (one of Viviane's son who later becomes Arthur's first knight) and falls in love with him despite the fact she has dedicated her life to the Mother Goddess. At one point, she and Lancelet, while visiting and roaming in the mists of Avalon and the crossing between the two worlds, they happen upon Gwenhyfar who is lost. Lancelet becomes smitten with Gwynhefar but lacks the courage to tell her so.  So we have Morgaine who is in love with Lancelet who is in love with Gwynhefar who at this point doesn't have a clue.

While in Avalon one of the Priestess, Raven,prophecizes that during Beltane, Morgaine is to perform a fertility ritual- she as the Virgin Huntress and give herself to young man as the Horned One, the King Stag. What Viviane doesn't tell Morgaine, is that the child conceived during Beltane will go on to be Arthur's sole heir and future king. When they wake up in the morning in a darkened cave, they make love again before the young man recognizes her voice.  The young man is her half-brother Arthur. Morgaine gives Mordred to her aunt Morgause to raise.

Then we have Gwynhefar, daughter of King Leodegranz, who is given in marriage to Arthur, but she doesn't love Arthur, she is in love with Lancelet. However, she is a good christian, God fearing, obedient girl and does her best to be a dutiful wife to Arthur. Unfortunately, she is unable to produce a heir for Arthur. Arthur refuses to leave his wife or take any consorts. Gwynhefar becomes increasing fanatical about her Christianity, pitting her against Morgaine, whom Arthur has invited to his court to be one of Gwynhefar's lady in waiting. Arthur is aware of Gwynhefar's and Lancelet's love for each other and one night, when they've all had a little bit too much to drink, invites Lancelet into their bedroom.   Turns out Lancelet is not only in love with Gwynhefar, but he is in love with Arthur as well.

Throw in the war with the Saxons, the search for the Holy Grail, and the fight with the church, christian beliefs vs the Mother Goddess and you have one heck of a story.  The Mist of Avalon is a very interesting retelling of the Arthurian Legend and well worth the read. There are two more books to the series, prequels "The Forest House" and "Lady of Avalon" which I am looking forward to reading.