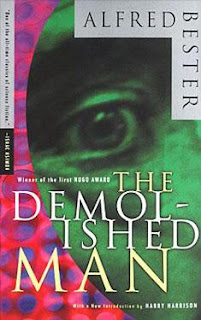 The Demolished Man
By
Alfred Bester

Back cover:  "In 2301 A.D., guns are only museum pieces and benign telepaths sweep the minds of the populace to detect crimes before they happen.  In 2301 A.D., homicide is virtually impossible--but one man is about to change that.   In this classic science fiction novel, the first to win the prestigious Hugo award, a psychopathic business magnate devises the ultimate scheme to eliminate the competition and destroy the order of his society.  Hurtling from the orgies of a future aristocracy to a deep space game preserve, and across the densely realized subcultures of psychic doctors, grifters, and police, The Demolished Man is a masterpiece of high-tech suspense, set in a world in which everything has changed except for the ancient instinct for murder."

Back in 1953 when I was barely a twinkle in my daddy's eye, Alfred Bester won the very first Hugo award for best novel, The Demolished Man.   The people in Bester's futuristic world are peepers, they can read each other's minds.   There are 3 different classes of Espers - the most common are class 3 types that can hear what others are thinking at the moment, Class 2 peepers can read a bit deeper and hear inner thoughts    Class 1 espers  can go even deeper picking up on peoples most inner urges before they even think about them.  Which is the reason why Class 1 espers are all involved in law enforcement and the government.   Bester is able to show some of the conversations the higher evolved peepers have in their minds, thinking at each other and conversing as they think, whether it's chaotically or cohesive.   For example when characters gather for a party (pg 30)

Much like any social gathering when folks start arriving, conversations are random and chaotic. However, these conversations all take place telepathically.   Which makes for some rather interesting reading until the characters start to think in cohesive patterns.

So what happens when someone decides to break the law. Usually the level 1 espers are able to catch the person before they do. Then they are subject to "demolition".  However, one man finds a way around that.  Ben Reich is the owner of Monarch Enterprises, a cartel whose rival is Craye d'Courtney.  Reich has been having nightmares about a man without a face and it is driving him crazy.  He takes it into his head that he has to kill Craye when he misreads Crayes acceptance of the merger as refusal.  He goes to a songwriter who teaches him a song that he won't be able to get out of his head for a month.

"A tune of utter monotony filled the room with agonizing, unforgettable banality.  It was the quintessence of every melodic cliche' Reich had ever heard.  No matter what melody you tried to remember, it invariably led down the path of familiarity to "Tensor, Said the Tensor."  Then Duffy began to sing.

"I've got some real gone tricks in that tune," Duffy said, still playing.  "Notice the beat after 'one? That's a semi-cadence. Then you get another beat after 'begun.' That turns the end of the song into a semi-cadence, too, so you can't ever end it.  The beat keeps you running in circles, like:  Tension, apprehension, and dissention have begun.  RIFF. Tension, apprehension, and dissention has begun. Riff..."


"You little devil! Reich started to his feet, pounding his palms on his ears.  "I'm accursed. How long is this affliction going to last?"

So Reich has this tune running through his head throughout to distract the level 1 peepers while he goes about planning and committing the murder.  However, he doesn't count on a witness, nor Lincoln Powell, the Police prefect.   Despite the song, Lincoln is able to detect what Reich has done telepathically, but it isn't admissible in court. So he has to use old fashioned police techniques to make his case.    Which leads back to the witness who was Craye's daughter who walked in as Reich killed her father.  She runs off and disappears.  Both Reich and Lincoln search for her.  When she is discovered she is found to be psychologically traumatized, cannot speak and doesn't remember anything.  Reich has the opportunity to kill her but doesn't.   Then Lincoln rescues her and attempts to telepathically reach her, while Reich does everything he can to cover his tracks or so his thinks, while going increasingly crazy.


When Lincoln thinks he has a solid case against Reich, it has to be given to old man Mose who will make the final decision.  Who is old man Mose:

"Old Man Mose himself occupied the entire circular wall of the giant office.  His multitudinous eyes winked and glared coldly.  His multitudinous memories whirred and hummed.  His mouth, the cone of a speaker, hung open in a kind of astonishment at human stupidity.  His hands, the keys of a multiflex typewriter, poised over a roll of tape, ready to hammer out logic.  Mose was the Mosaic Multiplex Prosecution Computer of the District Attorney's Office, whose awful decisions controlled the preparation, presentation, and prosecution of every police case." (pg 169)

Just when Mose after several false starts comes up with a 97% probability that Reich is guilty, Lincoln is told Craye accepted Reich's offer to merge thus wiping out the motive for murder which he thought was entirely for financial reasons.

How is he going to take down Reich now?   Will Reich get away with the murder.   Will Craye's daughter ever recover her memory?  What is demolition?   For the answers, you'll have to read the book.  I thoroughly enjoyed the story and have to say it is has withstood the test of time.


Carl of Stainless Steel Droppings:
"The Demolished Man builds in suspense right up to the shocking conclusion. Ever the master, Bester manages to leave hints in the denouement that perhaps more is going on than initially meets they eye. This is a book that deserves discovery by those who have not read this classic author. It is a captivating read that does not disappoint."


g.n.a.t at A Novel Read:
"Bester clinches the book in the final few pages. Again, he doesn't lay out the details, but he hints just enough to really force the reader to read again and go back and reevaluate the whole story.  If you're a Science Fiction fan, like classic sci fi, and have never read Alfred Bester, go out and buy his books now! They're worth it"
at February 05, 2010