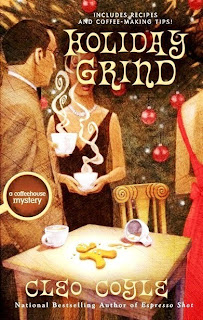 Description from Coffee House Mysteries: "Coffeehouse manager Clare Cosi has grown very fond of Alfred Glockner, the part-time comic and genuinely jolly charity Santa who’s been using her Village Blend as a place to warm his mittens. When she finds him brutally gunned down in a nearby alley, a few subtle clues convince her that Alfred’s death was something more than the tragic result of a random mugging—the conclusion of the police.

With Clare’s boyfriend, NYPD Detective Mike Quinn, distracted by a cold case of his own, and ex-husband Matt investigating this year’s holiday lingerie catalogs (an annual event), Clare charges ahead solo and discovers Santa had a list that he was checking twice—and the folks on it were not very nice. Then someone tries to ice Clare, and she really gets steamed.

Between baking delicious holiday goodies and fending off the attentions of a persistent professional elf, Clare sets out to solve Santa’s slaying. But she'd better watch out, because if she fails to stop this stone cold killer, she may just get the biggest chill of her life."

I discovered Cleo Coyle's cozy Coffee House Mysteries a couple years back and love her style, the characters in the story line, the stories and the interesting recipes using coffee. Holiday Grind is Cleo Coyle's Coffee House Mystery # 8 and it includes all the interesting characters who work and live around Village Blend. When her friend and Santa's Elf, Alfred doesn't show up for Clara's Fa-la-la-la latte tasting, she gets worried and goes to look for him.  She finds him dead in an alley way. The police think it is a mugging gone bad, but Clara thinks it is murder. Why? Well you'll just have to read the book to find out why. When she can't convince hard edged detective Emmanuel Franco and his partner Charlie Hong that it was murder, she is determined to prove them wrong. Clara enlists the aid of her her ex husband's mother Madame Dreyfus Aleggro Dubois, who is not only elegant and well off, but a snoop who knows the right people.  Clara ends up in some harrowing positions, putting her life at risk, when the killer decides she is getting too close.

Included with the story are recipes for coffee drinks, coffee syrup, all the fa-la-la-la lattes recipes along with all kinds of holiday recipes.   They all sound interesting and delicious, even for a tea drinker like me.


Books in the Series

Lesa of Lesa's Book Critiques:
"If you're looking for holiday reading that isn't all sweetness and light, Holiday Grind offers the perfect combination of Christmas atmosphere, a well-developed cast of characters, and a complicated mystery."


April of Cafe Of Dreams:
"Holiday Grind is filled to the brim with the series' trademark humor, sassiness and mystery. Though number eight in the series, Holiday Grind is so well written that it easily could be read as a stand alone. Perfect for the holiday season, indulge in this rich and frothy mystery and I'll guarantee that if you have not read the other books in this series, that that will quickly change!"


Vickie of Vixen's Daily Reads:
"I am always curious how the author will have the main character get involved in the mystery that needs solving. Sometimes they can be a wee bit awkward, but Cleo Coyle always has Clare getting involved rather seamlessly. It's because it's someone she knows or someone she cares about asks her to get involved."