Last week was an extremely light week. After accomplishing very little on Monday and Tuesday, hung it up for the week. I think the planned change to 6 weeks on, 1 week off isn't going to work. After three weeks we all look forward to a little break. I use it to regroup and get stuff done around the house. Father uses the break to work on his electronics project. James still gets in plenty of educational stuff although informal. Research on the computer, working on making lego movies, etc. So going back to 3 weeks on and 1 week off.

Boyhood and beyond: Father and James read 5 more chapters about Coveting, Temptation, Education for Life, Forgiveness and Dirty Diapers and Get up Again. The quote I like the best is:

"Whenever you fail, never lie down and quit. Get up! Restore. Get up! Reconcile. Get up! Rebuild. Pick up and ball and run. As long as there is even one second on the clock of life, GET UP!" pg 79

Read and discussed: Matthew 4 Temptation of Jesus. James had lots of questions about Satin tempting Jesus in the desert and all the why's and how comes and why didn't he.... St Joseph Baltimore Catechism 4 Creation of the Angels. Fun discussion about good, bad and guardian angels. Bible History 4 The Fall of our First Parents. Discussed tied back again to temptation.

Saxon Math: The repetition seems to be working and I'm loving the scripted lessons.

Voyages in English: Lesson 3 all about time lines and creating personal narrative from timeline. Completed sections 1.5 subjects and predicates and 1.6 compound subjects.

Writing with Ease: We're in the middle of the book on Week 19 and all about identifying central actions in scene, plus narration and dictation. The excerpt from Edith Nesbit's "Five Children and It."

Exploring the World of Physics: Father and James completed reading and discussing Chapter 3 all about gravity. From Physics Workshop, James put together his Gravity Locator tower and experimented with finding the center of gravity (or center of area). 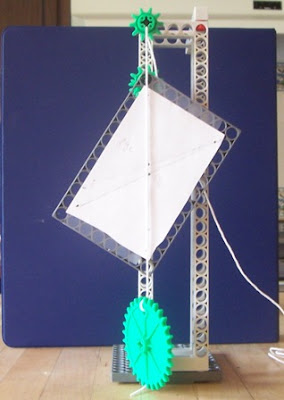 They also started reading "Isaac Newton and Physics for Kids."

History: Read Chapter 28 How Maine and New Hampshire were founded in This Country of Ours and Also started reading "Bard of Avon, the Story of William Shakespeare. Started having James practicing copywork using George Washington's Rule of Civility and Decent Behavior. "Rule #1 - Every action done in company, ought to be with some sign of respect, to those that are present." He still likes to print in all capitals. Working on getting him to write everything properly with capitals only at the beginning of sentences and the rest lower case.

Artistic Pursuits: We completed Unit 2 and learned all about Line and Shape and artist George Catlin. We practiced free drawing a small pumpkin.

Lively Latin: Completed lesson 1.1 and that's about it. Inevitably this gets push aside when tired from completing everything else. Working it in slowly.

Read Aloud: I finally discovered the secret to getting James interested in a story. I read the book, tell him about it and he either expresses interest or says meh!. The other day I read The Black Stallion and told him all about the story. The response - that's nice mom. Okay. Then I started reading "The Ark, The Reed and The Fire Cloud" by Jenny Cote. A scottish terrier, Max who lives in Scotland of course, hears a mysterious voice coming from the reeds saying Come to Me - Follow the Fire cloud. It's an adventure about animals being lead from all over the world, meeting up with their mates if they didn't have one and journeying to Noah's ark and the resulting flood. I started reading it and mentioned it to James and he's show me, show me.

He looked at the book and decided he wanted to read it together with me. So we've been reading it together every day, three or four chapters at a time. It's a fun read, especially with all the different characters accents - scottish dogs, french cats, spanish hummingbirds, english whales. However, I'm finding I can't go from a scottish brogue to an irish one. They kind of get mixed up. This is one story I'd love to have as an audio book. We are two thirds of the way through.

Boy Scouts: Tuesday was the monthly pack meeting and everyone went in their halloween costumes. The older boy scout den did a haunted house and it was fun watching all the kids go in. The first time, most of the younger kids had trepidation all over their faces. When they came out, face were lit up with glee and almost all of them went right back to the line to go through again. It was the first time James has ever experienced a haunted house type thing. I decided to go through with him the first time, since we didn't know what to expect. The kids were dressed up as gorillas, ghosts, and goblins and just jumped out from behind black curtains yelled boo and stuff. Pretty mild. He ended up going back again and again and again.

Tomorrow we are going down to the capitol for the California Capitol March in celebration of 100 years of scouting. The mayor will lead the march from Raley field to the Capitol steps where they will present a report on scouting to Governor Arnold Schwarzenegger. Then back to the Field for all kinds of fun festivities. It should be interesting and I'll be taking lots of pictures.

National Novel Write Month: I told James about it and he thought of a story he wanted to write. He's already started working on it and is writing a chapter a day. Fan fiction type of story about Super Mario Brothers. I wasn't going to stop his creative process by telling him he couldn't start until November 1st. So he's unofficially involved. I'm champing at the bit to start my story and working on outlines, writing down ideas, figuring out characters.
at October 23, 2009