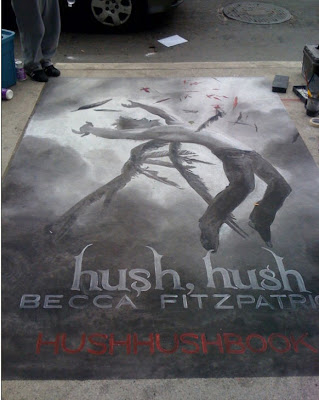 Publisher Description: Romance was not part of Nora Grey's plan. She's never been particularly attracted to the boys at her school, no matter how hard her best friend, Vee, pushes them at her. Not until Patch comes along. With his easy smile and eyes that seem to see inside her, Patch draws Nora to him against her better judgment.

But after a series of terrifying encounters, Nora's not sure whom to trust. Patch seems to be everywhere she is and seems to know more about her than her closest friends. She can't decide whether she should fall into his arms or run and hide. And when she tries to seek some answers, she finds herself near a truth that is way more unsettling than anything Patch makes her feel.

For she is right in the middle of an ancient battle between the immortal and those who have fallen -- and, when it comes to choosing sides, the wrong choice will cost Nora her life.

"hush, hush" is a very, very good young adult paranormal story in which teenagers act like typical teenagers, except with a twist. Nora gets paired with Patch in biology class. Their first assignment - interview your partner. However Patch makes it difficult for Nora because he is the silent, mysterious type and doesn't like to answer questions. She's persistent though which leads to all kinds of trouble. The more she gets to know Patch, the more difficult life becomes. Someone is following her and she thinks it is Patch.

She lends Vee, her bff, her jacket and Vee gets beat up. A homeless woman takes her coat in exchange for directions and is gunned down. Then the body disappears. Someone breaks into her house and her bedroom is totally ransacked. But when the police arrive to investigate, everything has been set back to normal. And the two young men who befriend her and Vee seem to be acting strange.

It all seems to center around Patch. Sometimes he acts like he wants her around, other times he doesn't. He seems to be everywhere she is. Is he the one trying to make her crazy? The story is full of twist and turns and at times you can't tell who the good guys are, which makes it all the more scary and interesting.

Thank you to Emily of Simon and Schuster via Shelf Awareness for sending me an ARC of hush, hush to review. I thoroughly enjoyed it. However, I don't know how it really ends. Why? Because the hardcover release has a completely different ending. Looks like a trip to the book store is in order.

Steph of Reviewer X (Teen point of view)
"...dark and both relevant and whimsical, with memorable characters, great quotability, and abundant humor. Hush, Hush doesn’t stop at exciting--it was an experience so complete and enjoyable, it tides you over."

Karin Librarian of Karin's Book Nook:
"HUSH, HUSH by Becca Fitpatrick is an enjoyable mix of suspense and romance. Patch is definitely the type of dark and mysterious character that will make girls go weak in the knees."

Liviania of In Bed with Books
"Creepy moments and sexy moments abound, in a nice balance. Plus, several of Nora and Patch's conversations are snarky fun."