Dracula The Un-Dead by Dacre Stoker and Ian Holt 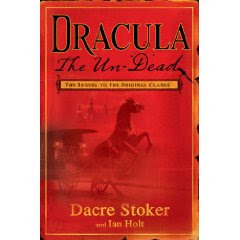 Product Description: "Dracula The Un-Dead is a bone-chilling sequel based on Bram Stoker's own handwritten notes for characters and plot threads excised from the original edition. Written with the blessing and cooperation of Stoker family members, Dracula The Un-Dead begins in 1912, twenty-five years after Dracula "crumbled into dust." Van Helsing's protégé, Dr. Jack Seward, is now a disgraced morphine addict obsessed with stamping out evil across Europe. Meanwhile, an unknowing Quincey Harker, the grown son of Jonathan and Mina, leaves law school for the London stage, only to stumble upon the troubled production of "Dracula," directed and produced by Bram Stoker himself.

The play plunges Quincey into the world of his parents' terrible secrets, but before he can confront them he experiences evil in a way he had never imagined. One by one, the band of heroes that defeated Dracula a quarter-century ago is being hunted down. Could it be that Dracula somehow survived their attack and is seeking revenge? Or is their another force at work whose relentless purpose is to destroy anything and anyone associated with Dracula?"

I recently received an Advance Reader Copy of "Dracula The Un-Dead" by Dacre Stoker and Ian Holt from the Penguin Group through Shelf Awareness. I just finished reading "Dracula the Undead" and have to say I was pretty well riveted through the entire novel. Having never read the original "Dracula" by Bram Stoker (shame on me), didn't have any preconceived ideas about the story. Yes, it was a bit gory at times, but nothing I couldn't handle.

Once again someone or something is preying upon woman and leaving them torn to pieces much like Jack the Ripper of the olden days. Quincey gets involved in a stage production of Dracula written by Bram Stoker. Stoker put the story together from the drunken ramblings of a man he met many times in a pub. Little did he know the stories were true. And that his story would draw the attention of not only Count Dracula himself, but a beautiful and deadly vampiress from the 16th century. Who is attacking the heroes and how can they defend themselves. This supernatural thriller is very well written, full of heart palpating action, and entertaining.

Thank you to Carrie from Dutton of the Penguin Group for providing me with a courtesy copy. Dracula The Undead will be released on October 13, 2009. Check out the website for interesting tidbits about the book, plus events and to test your Dracula IQ. I scored a 7 and am a Dracula student and have more to learn.

Lexie Piper of BCF Reviews:
"I love vampire stories, and this one was everything that I expected. I haven’t actually read the original Dracula story, but I’ve seen the film and know lots about the tale, but that doesn’t matter, Dacre did a great job of recapping the previous book without making it boring and repetative, and I never felt like I was missing any plot lines as it was always explained"

Sidhe Vicious Reviews - excerpt from chapter one
at October 07, 2009