I've finally got past whatever was blocking me from writing and have made some progress on the rewrite of Floating on the Surface. Not as much as I like, but enough to get my imagination in gear again. I found a great picture the other day that just captured me and just had to make a new book cover. 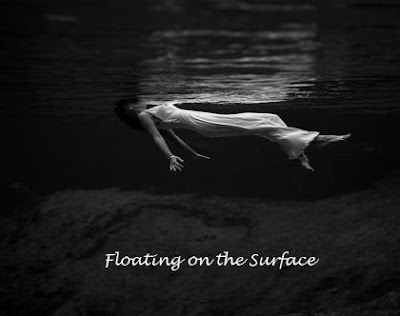 Cool! Really sparks my imagination. National Novel Write Month will be starting in just 31 days, so have to get back into the habit of writing at least 1667 words a day. If I start shooting for that amount every day, by the end of October I should have most of the rewrite done. I'm working my way back up to it. Day light savings time ends on October 31st and setting the clock back an hour will help. It will help me get back in the habit of getting up at 6:30. As long as I get up a couple hours before the rest of the household, I'll have my quiet time to write.

I've been working on character outlines and world building for Eyes in the Ashes and coming up with some interesting ideas. It's definitely going to be a murder mystery and I'm trying to decide if my setting will be small rural town in California or Texas. I like the idea of it being a small western style town with wooden boardwalks. A town with character as well as a lot of characters. When I was writing my 2nd WIP, the extra characters and subplot sort of developed as I went along. So we'll see what happens.

I'm getting really psyched. I think I may try Lazette Gifford's outlining idea - phrase drafting. Thanks to Debbie of Inkygirl.com for reminding me of it. I had read about a couple years ago but forgot about it. My bad. But with all I've learned since then, I think it is a really good idea now. That way I can capture some of the thoughts that having been coming to mind. Otherwise they just turn into fleeting thoughts and poof they are gone. I've discovered as I get older, that unless I write things down immediately, it will be lost forever in the ether.

I find this saying by Marie Antoinette intriguing:

"There is nothing new except what has been forgotten"