I've been thinking about discipline lately. Part of the territory if you have kids. But also applies to all parts of your life: career, writing, reading, blogging, hobbies, kids, pets, etc. No rules + no discipline = chaos. There are actually an amazing number of books out there with a wide variety of methods and ways of thinking. According to dictionary.com there are 9 definitions for discipline:

Now what works for one person doesn't work for another. I think it depends entirely upon your temperament and how you react to certain things. Having a kid has been a learning experience in the art of discipline. What worked a couple years ago, may not work today. I heard several people mention "1-2-3 Magic: Effective Discipline for children 2 -12 by Thomas W Phelan." over the past couple years and how wonderfully effective it is. Unfortunately I discounted the book because counting didn't work with James.

You see - I traumatized the kid at the tender age of 1 when I used counting on my tomcat - Neysa. (he was named after a unicorn from one of piers anthony's books and up until I took him to the vet a few weeks after acquiring him, we thought he was a girl. Apparently I had been completely blind. I refused to change the name) The cat would come to the door and I would open it. He would sit there and not come in. I would give him to the count of three, using a stern voice. If he didn't come in by three, then he had to stay out. James was in the room one day and I used my stern voice on the cat. He burst into tears and sobbed and sobbed. I tried to reassure him that he wasn't in trouble, but it happened every time so we quit the counting thing. Nor could I use it as a discipline measure for him - just too sensitive about it.

Well, he's outgrown the issue and the book came up again recently, so I decided to get it. Wonderful book, once you get past the first chapter which sounds like an infomercial. 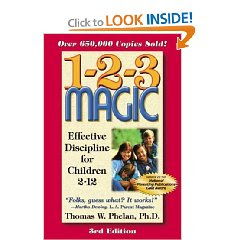 Back cover: "It's not easy being a parent. You want kids who listen and children you can enjoy. You want to raise happy and competent youngsters, but you don't have a lot of free time to read discipline and parenting books. You also don't need advice that requires you to be a saint, genius or professional psychologist.

Step 1: Controlling obnoxious behavior: Learn an amazingly simple technique to get the kids to stop doing what you don't want them to do (whining, arguing, tantrums, sibling rivalry, etc.)

Step 2: Encouraging Good Behavior: Learn several effective methods to get your kids to start doing what you want them to do (cleaning rooms, picking up, going to bed, homework.)

Step 3: Strengthening your relationship: Learn four powerful techniques that reinforce the bond between you and your children.

In 1-2-3 magic, you will learn how to manage the six kinds of testing and manipulation, how to handle misbehavior in public and how to avoid the talk-persuade-argue-yell-hit syndrome. You'll also discover how your silence can speak louder than your words."

Dr. Phelan has some very useful advice and it works. Once I read the book and explained the concept to Father, we then sat down with James to explain it. The basic premise for stopping obnoxious behavior is very simple. Once you've asked them to stop whatever it is the first time and they don't, instead of negotiating, explaining, arguing, lecturing, and getting all emotional, say "that's 1". If they continue the behavior, say "That's 2". If they still continue say "That's 3 and take a 10 minute time out." By this stage of the game, said child knows certain behaviors are wrong, so no discussion is needed. If discussion is needed, it is to saved for a later time when all are more apt to listen. There are some behaviors that warrant an immediate time out and you don't have to give them the 1 or 2. Just "that's 3 - take a time out." James usually stops at 1 now. :)

Up until this point, when ever James got in trouble, he was sent to his room on a time out with the threat of the removal of something. We weren't always consistent which was the problem. James is also very analytical and likes to discuss, argue, negotiate until you get frustrated and in my case, end up yelling at the top of your voice. Including things you never expected to hear yourself say including "Just because I said so, that's why." At which point, he would get it and back down. Wouldn't you, if someone was yelling in your face. What is it about kids that bring out the worst in you. I would never imagine yelling at my boss, my parents, Father or my friends. Why do we do it with our kids. I've worked hard to change that behavior. Father, on the other hand, using psychology, would end up in his room talking for half an hour explaining until James eyes glazed over and receive additional time for talking back while being lectured.

Since we started using the method, I have to say things have been remarkably calmer - It works! The hard part for Father is not explaining anything. According to Dr. Phelan, the two biggest discipline mistakes are too much talking and too much emotion. The too much talking comes from trying to treat your child as a little adult and expecting him to understand reason. To much emotion and it gives the power to your child.

"An important rule, therefore is this: If you have a child who is doing something you don't like, get real upset about it on a regular basis and, sure enough, she'll repeat it for you." pg 20

There are plenty of examples and exercises in the book and tips for encouraging good behaviour. Dr. Phelan has also written "1-2-3 Magic for Christian Parents" with relevant bible verses. Highly recommended.