Meanderings on Monday mindfully meditating on the mundane 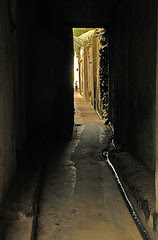 This weekend, we watched a couple shows we dvr'd during the week.

He's so cute! Don't you just want to pinch his cheek!

I love Eureka which is on the sci fi channel and have been watching from the first season. And I don't mind product placements in the middle of a show as long as they're done tastefully such as Jo's marvelous new police car, but what bugs the heck out of me is.... What the heck is with changing the name of the channel to "SyFy." Their explanation:

“The name Sci Fi has been associated with geeks and dysfunctional, antisocial boys in their basements with video games and stuff like that, as opposed to the general public and the female audience in particular,” said TV historian Tim Brooks, who helped launch Sci Fi Channel when he worked at USA Network.

Really. I never considered myself a geek, nor the majority of my family or friends who grew up on science fiction and absolutely love it. So, they are changing the name to non geeky "syfy" which will enhance their image that they have more imagination and will have shows with more imagination.


“When we tested this new name, the thing that we got back from our 18-to-34 techno-savvy crowd, which is quite a lot of our audience, is actually this is how you’d text it,” Mr. Howe said. “It made us feel much cooler, much more cutting-edge, much more hip, which was kind of bang-on what we wanted to achieve communication-wise.”


Oh Please! The new name is annoying and the glaring misspelling just bugs the heck out of me. Can you tell I don't like change.

Changing the subject: The new season of Mad Men has started. Father loves the show and out of curiosity I sat down to watch the first new episode with him last night. He brought me up to date on the happenings of the show, the people and who was involved with whom. It was very weird at the beginning with one of the lead characters, Don, having these visions about a prostitute having a baby and the baby's name being named dick because she threatened to cut off his privates and boil it in hog's fat for getting her pregnant. That part of the show made no sense whatsoever. We almost turned it off at the surprising guy on guy action in which they were establishing "Hey, we decided Sal needs to be gay now," but fast forwarded through it. The politics being played by the bosses was interesting and I have to say it's a soap opera.
My Modern Literature class is done. Finished the final on Sunday afternoon and submitted it. It was a combination of analyzing "White Noise" by Don Delillo and "Portrait of the Artist as a Young Man" by James Joyce which were equally strange books and comparing and contrasting poetry by modernist poets. I was immersed for much of the weekend in the mind and poetry of Hilda Doolittle. Poetry isn't exactly my forte but I do have to say she had a way of making nature sound erotic.

Hurl your green over us --

Cover us with your pools of fir."